Based on typical ESAL equivalency factors and the fourth power law it is clear that heavy vehicles cause a majority of pavement structure damage (with the notable exception of studded tire wear). Therefore, even though trucks make up a minority of motor vehicles (see Figure 1), they are a major consideration in pavement design. This in-depth section briefly looks at
the truck and bus population in the U.S. and some of their typical characteristics.

Trucks can be divided up into any number of different categories or classes. The most general truck classification is probably by gross weight. For instance, a family sports utility vehicle or 3/4 ton pickup is drastically different than a delivery van or an interstate tractor-semi trailer. Thus, one common practice is to classifying trucks and buses by gross vehicle weight rating. The three most common categories are shown below.

Looking at Figure 5, it is interesting to note that the trucks of primary consideration for pavement performance, the heavy trucks, only make up a small fraction of the U.S. truck population. In essence, structural pavement design is usually concerned with no more than about 0.6% of the U.S. motor vehicle population (38.4% trucks, of which 2% are heavy trucks/buses). However, these trucks make multiple trips and typically travel many more miles than the average passenger vehicle. For example, a typical passenger vehicle may travel between 5,000 and 15,000 miles/year while a typical heavy truck may travel from 30,000 – 80,000 miles/year (USDOT, 2000[1]).

The FHWA classifies vehicles in terms of their configuration rather than weight. This type of classification system is more conducive to traffic applications but can be adapted for pavement loading applications. It can also be easily confused with the vehicle manufacturers truck classification system shown in Table 1. The FHWA Traffic Monitoring Guide (TMG) recommends classifying vehicles into 13 different categories. All States currently use this classification scheme or some variation of it for classifying vehicles, although few use it exclusively (FHWA, 2001[2]). States typically aggregate the 13 FHWA categories listed in Table 2 into a small number of categories (about three to five) for ESAL forecasting and estimating. Figures 6 through 11 show some FHWA vehicle class examples.

In addition to the number and weight of trucks, pavement design is also concerned with where these trucks travel. For instance, many residential streets only experience one or two heavy trucks per week (e.g., the garbage truck) while some of the busiest interstate truck routes can experience volumes of up to 500 trucks/hour (USDOT, 2000[1]). Figure 12 gives an idea of truck travel on National Highway System (NHS) routes.

In their Comprehensive Truck Size and Weight Study (2000[1]), the U.S. Department of Transportation made the following general observations on truck flow within the U.S.:

Although buses are sometimes ignored in truck counts, they can significantly contribute to overall pavement loading – especially in urban areas. Many times, school buses provide the only major loading for residential pavements. Furthermore, buses often inflict more pavement damage than much heavier trucks due to their axle configurations and wheel loads. As shown in Table 3, a heavily loaded, dual powered bus (both diesel and electric power systems) can impart over 6 ESALs per bus. Table 3 tabulates various bus LEFs for King County (WA) Metro.

If no other information is known about a bus route other than the volume of buses, use an ESAL/bus corresponding to 50 percent full. This results in an average ESAL/bus @ 1.60. 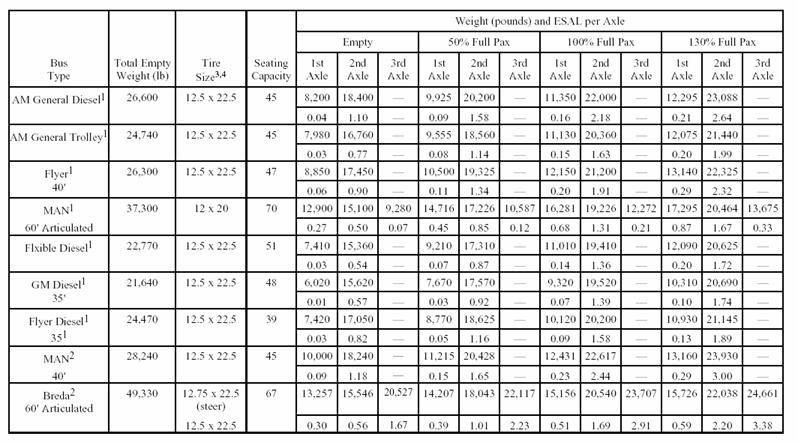