Healthy humans can hear audible sound with a range of 20 Hz to 20,000 Hz with a maximum intensity at 3,000 Hz. (Hz = Hertz, or cycles per second.) Frequencies below 20 Hz are called “infrasound” and above 20,000 Hz “ultrasound.” The numerical magnitude of a sound typically expressed as sound pressure level in decibles, abbreviated dB.

Distance is important, since the intensity of sound decreases inversely as the square of the distance from the source.

Typically, several sources of sound occur at the same time and is not a linear function.
For example, adding one 60 dB sound to a second 60 dB sound adds to 63 dB. The formula follows:

The calculation for two 60 dB sounds is:

The Energy Equivalent Sound, or Leq represents the same energy as the time-varying sound over the measurement period; essentially an average.
Some common time scales associated with Leq are 24 hr, 1 hr, 1 minute, one day or night.

To avoid expressing sound or noise in terms of Pascals, Pa, the decibel scale is used. The scale uses a hearing threshold of 2.0×10-5 Pa. Sound Pressure Level (SPL) can be calculated by using the following equation:


According to the “Fundamentals and Abatement of Highway Traffic Noise” (FHWA, 1973[1]), a sound level change of 1 dB can barely be detected by humans, while changes of 2 to 3 dB are barely noticeable.
Also,

The way the ear responds to sound is not proportional to sound intensity but nearly proportional to the log of sound intensity – it depends on the frequency of the sound. The human ear has peak response around 2,500 to 3,000 Hz and a relatively low response at low frequencies. To account for this, sound weighting schemes have been developed, the most common being the “A-weighting” scale.

The average person perceives a change in sound level of about 10 dB as a doubling or halving the sound’s loudness. Table 3, below, shows a relationship between dBA and “noise loudness” levels. 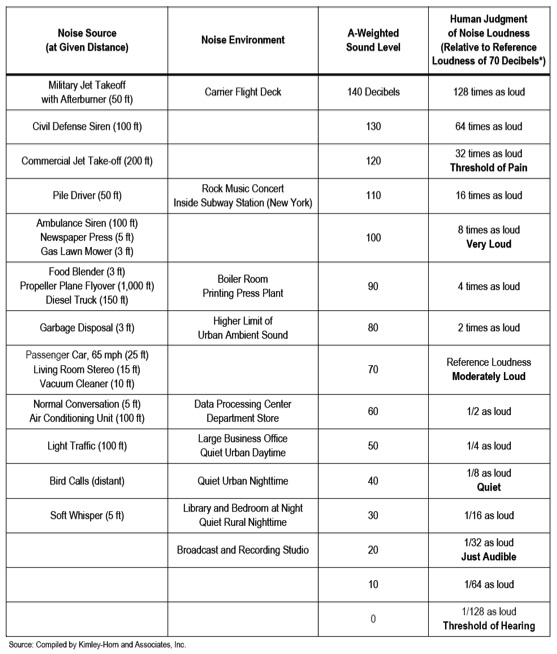 Sound pressure levels for the lower and upper portions of frequency are reduced before being combined into one single sound pressure level value. Designated dBA or dB(A). More weight is given to frequencies starting at 1,000 Hz.

Construction noise comes from equipment and activities. These include motors running, tool use, and impact, among other things. Hearing loss is common among construction workers.

Hearing loss is gradual, so it may not be noticeable until the damage is already done. The ability to hear higher pitch is lost first, while the first loss that people tend to notice is the loss of the ability to hear speech. Hearing loss is also dangerous – think about what might happen if a person can’t hear someone shout or the sound of equipment behind them.

Noise can also cause tinnitis (ringing in the ears), tiredness, stress, and nervousness. Severe tinnitus can disturb the ability to sleep, and cause irritability and depression. Excessive noise raises blood pressure. Impact noises over 140 dB cause immediate nerve damage to the ear.

The Noise Reduction Rating, NRR, is a single number which is required by law to be shown on the label of each hearing protector sold in the US (40 CFR, Part 211, Subpart B, Hearing Protective Devices).

Why – 7? This correction factor is used to account for the de-emphasis of low-frequency energy inherent to the A-weighting scale.

Typical equipment and their associated NRRs:


When noise reaches 95 decibels, OSHA requires you to work less than 4 hours without hearing protection. This does not mean that 95 decibels is a safe level of noise; 1 in 5 people exposed regularly to 90 decibels will lose some hearing, while short, very loud noises do the most harm.

A good rule of thumb is that if people 3 feet apart need to raise their voices to speak to one another, it is too noisy and hearing protection should be used.

Also try to move around the site in the course of the day, and move from more to less noisy areas as work allows. During rest or lunch breaks, move to a quieter area.

Use hearing protection regularly. This doesn’t need to completely block voices or other noise, like backup alarms. Reduce the noise, don’t shut it completely out.

Make a yearly appointment to have a doctor check your hearing.

The Washington Industrial Safety and Health Act (WISHA) sets the Permissible Exposure Limit (PEL) at 85 dBA for a 8 hour shift, while the OSHA PEL is 90 dBA for 8 hours. According to WISHA, for every 5 dBA above 85, the exposure time is cut in ½. This is referred to as exchange rates.

According to Washington State law, the following table limits the exposure of construction workers to noise and delineates the protection required. 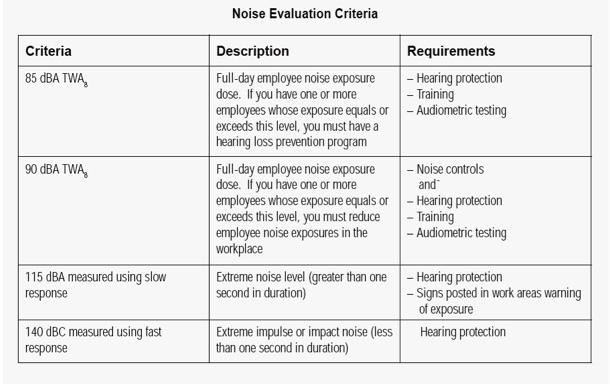 UW School of Public Health and Community Medicine has done extensive studies on construction noise, and provides brochures for most of the major construction trades.

Maximum permissible noise levels within Seattle for all types of sounds during the daytime (7 am to 10 pm).

Maximum permissible noise levels within Seattle for all types of sounds for weeknights (10 pm to 7 am) and weekends and holidays (10 pm to 9 am).

Construction times allowed by the City of Portland noise code is 7 am to 6 pm Monday through Saturday, and allows for noises up to 85 dBA at a 50 ft. distance. However, Portland recognizes that some equipment cannot meet that standard (such as jackhammers, concrete saws, etc) and are exempt from the standard during the permissible construction times.

Based on extensive calculations and measurements from Boston’s Central Artery/Tunnel project. The data base has extensive equipment data measured via A-weighted Lmax at a distance of 50 ft. from the construction equipment.
Refer to the publication: FHWA-HEP-05-054, January 2006, “FHWA Roadway Construction”

Video 7: Decibel readings below HMA drum about five feet from the drum center.

Video 8: Decibel readings below HMA drum about ten feet from the drum center.

Video 16: Decibel reading of ambient noise at the ground level within an HMA production plant yard.

Video 17: Decibel reading of ambient noise at the ground level within an HMA production plant yard.