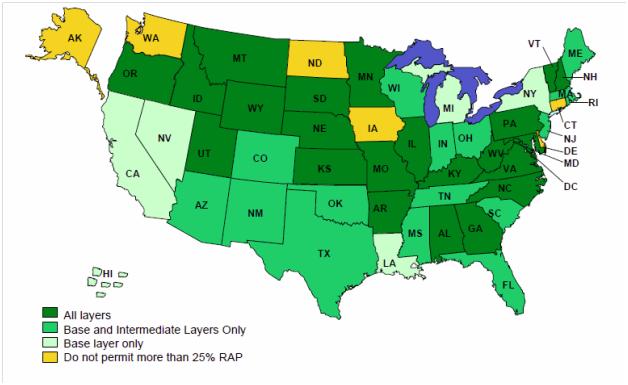 The kind of RAP we’re talking about doesn’t require a great stereo, just a desire to support sustainable construction practices and save money at the same time.  In this edition of the RoadReady newsletter, we’re going to discuss some of the latest research on reclaimed asphalt pavement, also known as RAP, and more specifically asphalt pavements comprised of high levels of RAP.

When it comes to recycling, there are really two issues at play—how much of the old stuff can you salvage, and in making new stuff, what’s the most recycled material you can use (as opposed to virgin material) and still meet performance requirements? For example, in paper recycling it’s possible to make a cardboard box that’s 100% recycled fiber, but for office paper the amount of recycled content might be a lot lower. Similar considerations apply to the recycling of roadway materials, such as reclaimed asphalt pavement (RAP). The more you can recycle the better, naturally, but sometimes you have to deal with challenges to achieve a high level of recycled content.

Although RAP has been used in construction of asphalt pavements for several decades, it is most commonly incorporated into the mix in limited quantities. In the past, specifications that addressed RAP usage might allow it to substitute for up to 15% of the virgin aggregate in the mix, perhaps increasing to 25% if the mix design was adjusted to account for increased aging of the RAP binder.

More recently, however, test projects have shown that it is possible to build quality pavements with significantly higher percentages of RAP. As a result, RAP can be successfully incorporated into asphalt mixes at higher levels by following best practices in using the material. In this discussion, we will focus on issues related to high-RAP pavements, defined as those with a RAP content above 25%.

As reclaimed pavement material, RAP includes both aggregate and asphalt binder. Most of the time, RAP content is described as a percentage of aggregate weight, or of the total weight of the mix. However, it can also contribute to replacing some of the virgin asphalt binder, and both of these elements need to be taken into account for high-RAP mixes.

Two of the key issues for construction of high-RAP pavements are materials management and mix design. The RAP needs to be handled and stored appropriately after it is reclaimed but before it is recycled into the new mix. Also, because it makes up such a large proportion of the material, the RAP needs be accounted for in the design of the mix.

For high-RAP pavements, it is normally helpful to use RAP that has been fractionated, or separated by particle size in the same way you would do for aggregate. This creates flexibility in adjusting the composition of the RAP to the mix design. Fractionating RAP is sometimes also used to reduce variability of the material, although unprocessed RAP that has been milled from a single source can have very consistent properties as well. Variability within RAP stockpiles should be checked to help determine the suitability of RAP material for pavement construction.

Fractionation should be implemented with care when it is necessary (pavements with a lower RAP percentage can often use material that is not fractionated). One of the concerns with fractionation is that crushing the RAP material tends to increase the proportion of fines and could lead to excessive dust content in the mix. While some crushing operations may be required, particularly for RAP that is still in large chunks, over-crushing should be avoided.

Another recommended practice is to conduct processing prior to the activity of feeding the RAP into the mix at the plant. By separating crushing and screening from the process of blending mix materials, you can better ensure that the RAP fractions in the mix maintain the proportions that have been selected.

Except for in-place recycling processes, RAP will need to be stored in stockpiles, whether or not it is fractionated. Normal stockpiling practices can be used, as the RAP does not tend to re-compact, but it may form a crust on the stockpile surface. The crust can easily be broken with a front-end loader, and has a side benefit of helping shed water off the stockpile. Water is a concern because RAP stockpiles tend to hold water and not drain as well as aggregate, so covering stockpiles and storing them on sloped pavements for drainage is encouraged.

Stockpiles may be traceable to a specific source or consist of RAP mixed from a variety of sources. For high-RAP pavements, recycling material from a single source can be helpful if it is available in sufficient quantity. Using RAP from a single source simplifies mix design work, particularly if the mix properties of that source are already known.

RAP can be incorporated into standard Superpave mix designs for asphalt pavements. Considerations include the properties of the RAP itself along with adjustments that may be needed in other elements of the mix design. Both the aggregate material in the RAP and the binder content should be evaluated so that the mix design can determine the properties of the combined RAP and virgin materials. If the RAP is from a known source, original construction records (if available) will be very helpful in determining the appropriate values.

Some mix design procedures have accounted for RAP by adjusting the grade of the virgin binder to be used in the mix. The asphalt binder content in the RAP is aged and will typically be stiffer than a virgin binder. Two options commonly used for pavements with a lower percentage of RAP (15-25%) are to select the virgin binder based on a blending chart, or simply to use a virgin binder one PG grade softer than normal. For example, a PG 70-16 binder might be replaced by a PG 64-22 when a significant amount of RAP is used.

As the percentage of RAP increases, it typically also increases the stiffness of the mix, which supports the use of softer virgin binders and blending charts to design high-RAP mixes. Although they are an approximation, evaluation of high-RAP pavements in the field indicates that these are a reasonable method for selecting virgin binder. With good quality control and testing procedures, this approach can work for mixes with RAP content up to 40-50%.

There have been several efforts to specifically study the performance of high-RAP pavements. The FHWA’s Long-Term Pavement Performance (LTPP) program included a specific study of mixes containing at least 30% RAP paired with pavements of purely virgin materials for comparison. Covering locations distributed across the U.S. and Canada, the study concluded that in most cases, the high-RAP pavements performed as well as the virgin pavements or better. The National Center for Asphalt Technology (NCAT) has also built high-RAP test sections and subjected them to accelerated loading on its test track, with similar results.

Based on this research, well-designed high-RAP pavements should be able to enjoy performance and service life similar to that of pavements without RAP. Any observable differences are likely due to RAP characteristics that can be adjusted for, such as binder stiffness and higher dust content. For example, in some pavements the stiffer mixes showed more cracking, probably due to binder aging, while reducing rut depth. Overall, the performance and ride quality of high-RAP and virgin pavements was similar.

Fundamentally, RAP has the same ingredients as any other asphalt pavement. If you give the same attention to the quality of the RAP as you would to the quality of virgin materials, you should be able to blend them into a mix for constructing durable, high-quality pavements. Recycling can be good for the environment and your bottom line, you just have to make sure it’s incorporated into the product properly and consistently!

3 comments on “Quality RAP, Even Without A Good Beat”