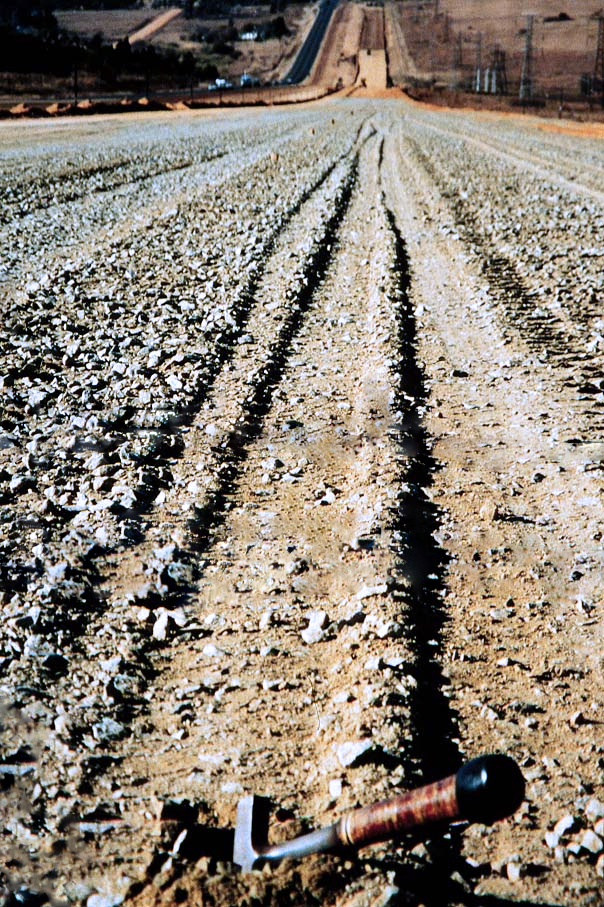 A good foundation is rarely noticed, but it allows you to build anything you want on it. A lot of the things that go into a well-built road aren’t always immediately visible to the naked eye, and that’s particularly true of soil quality. Most of the time it’s hidden well below the surface, and even looking at the soil directly, it may not be obvious whether it’s good material. Nevertheless, native soil material that serves as a subgrade or base is an important part of pavement design. In this edition of the RoadReady newsletter, we’ll look at techniques to determine if the soil you build on will provide a solid foundation for construction.

What is dirt made of? Snakes and snails and puppy dog’s tails? Well, hopefully not, at least in road construction, because all of that stuff is organic material. While organic matter may be mixed in with soil, particularly in fine-grained soils, it is generally undesirable in any part of a roadway structure. Highly organic soils such as peat, which is composed of decayed vegetation, should always be avoided, and must be removed and replaced with more stable material if they are present.

To be suitable for roadway use and provide a long-lasting foundation, any soil should be composed primarily of rocks and minerals, also known as aggregate. In this context, our focus is on soil in an unbound condition (meaning it is not stabilized with a binder such as asphalt or cement), but fundamentally this is the same kind of material as the aggregate that goes into a pavement mixture.

There are several different systems used for soil classification. Two examples in common use are the Unified Soil Classification System, which is documented by ASTM as Standard D2487, and the AASHTO system, which was originally developed in 1929 and has been revised a few times into the system used today. These two systems use slightly different definitions, but some of their terminology is similar.

A fundamental characteristic common to both systems is distinguishing between coarse and fine soils based on the percentage of material that passes a No. 200 (0.075 mm) sieve. Coarse soils can further be characterized as gravel or sand, depending on how much material is retained at a larger sieve size (which one depends on the classification system). Similarly, fine soils can be classified as silt or clay according to how much material is retained on one of the smaller sieve sizes.

Classification and Use Scenarios

When evaluating soil based on its classification, it should be considered in the context of the intended use and desired gradation. In general, more gravelly soils will have greater strength and resistance to frost action. Soil that is sandy, silty, or clayey may be problematic, depending on your requirements. To deal with native soil of inadequate quality, you can add a binding material such as lime, cement, or asphalt emulsion, or you may need to remove and replace the soil if it cannot be strengthened sufficiently.

For a base course, dense-graded soil is often preferred that has limited air voids, so some fraction of all particle sizes is needed, but with a low percentage of fines. If the soil is to serve as a surface course, for example on a gravel road, the proportion of fines should be slightly higher. As a result, converting a gravel road to a paved road is not necessarily as simple as just adding an asphalt overlay or a chip seal. The fines content that makes a good surface may be too soft to serve as a suitable base course, potentially shortening the life of the new roadway structure.

If you’re out in the field, you may not have all the equipment to determine a precise soil classification, but you can still use some basic checks to assess soil quality. One extremely simple test you can use with larger soil particles is to hit a few with a hammer and listen to the sound they make. This can give you an idea of the soil’s durability and how well it will resist abrasion. Good, solid material will typically make more of a “ping” sound, while a “thunk” may indicate that the soil is weaker and less durable.

With smaller particles, an important consideration is their effect on the soil’s plasticity, which refers to the extent to which the soil will deform when loads are applied. An easy way to get a rough idea of plasticity is to get the material wet and see how well it holds together. Since the focus is on small particles, it will help if you can pass the soil through a screen or sieve first (a No. 40 sieve – 0.425 mm, is best) to separate the material.

Mix in a little water with the fine particles to create a paste, then let it dry. While the material is still wet, you can check how easily it is to roll it into a thread, and whether the thread will hold together if you try to pick it up. Or, when the material has dried, you can pinch it with your fingers to see if it holds together or falls apart. Soils with lower plasticity generally will fall apart very easily, while those with higher plasticity maintain more tension in the material and stay together in one piece.

Of course, basic checks like these are very informal and should only be used to get a rough idea of soil quality. If your project specifies particular soil characteristics, you will need to obtain proper soil samples and perform appropriate tests to verify that these are met.

In addition to sieve analysis for soil classification, a number of field and laboratory tests may be performed on roadway soils. The California Bearing Ratio (CBR) and Dynamic Cone Penetrometer (DCP) tests can be used to evaluate the load-bearing strength of the soil material. To measure the plasticity of fine particles in the soil, other tests can be performed to determine the plasticity index (PI) and sand equivalent (SE) value. The fine particles are mixed either with water (plasticity index) or a calcium chloride solution (sand equivalent) and a standardized test procedure is performed. In each case, the procedure gives two measurements that reflect the soil characteristics, and the PI or SE value is based on the relationship between those measurements.

The values from CBR and DCP tests can be correlated with each other. However, even though they target similar characteristics, there is no direct relationship between PI and SE test results. As a result, you cannot convert the results from one soil test type into an equivalent value for another test. If your specifications call for a particular type of test value result, you will need to conduct the correct test to determine that value. In general, the SE test procedure is considered more sensitive when the soil has relatively low levels of fine particles, while the PI test was developed for sensitivity at higher levels of fines.

Just because native soil is already there when you start a road construction project, you shouldn’t simply accept it without checking out whether it’s good material. If it needs to be strengthened, apply an appropriate treatment, or it could need to be removed and replaced with better material.

When constructing a pavement, the quality of the pavement structure depends in part on what’s underneath. Also, just like two paved roads may have different levels of quality, not all dirt or gravel roads are the same either. So whether the soil will serve as a base course or the road surface itself, make sure it meets the design needs of the road.

5 comments on “The Nitty-Gritty of Soils in Roadway Design”