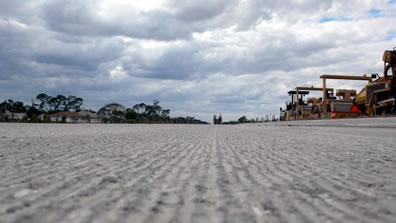 A common technique when rehabilitating aging asphalt pavements is to mill off a portion of the existing surface before placing a fresh layer. This process helps eliminate irregularities in the pavement surface, restore ride, creates more surface area for improved bonding and allows the road to maintain a consistent clearance for any bridges or overhead structures. This is done with a milling machine, which uses a large drum with carbide tipped teeth to remove the asphalt. The material that is taken off can be used as recycled asphalt pavement (RAP). In this edition of the RoadReady Newsletter, we’re going to explore a newer variation on the milling process known as micro-milling.

Micro-milling is providing an innovative way for contractors to rehabilitate asphalt pavements. Also known as surface planing or fine milling, micro-milling uses a milling drum with more teeth and a tighter lacing pattern to create a smoother surface than the traditional milling process. This smoother surface can be opened to traffic with no further treatment and also provides a better surface for overlays, particularly thin and porous lifts.

A micro-milling drum with 3 times (est.) more bits than a standard drum (Courtesy of Keystone Engineering)

A few categories of milling exist that are defined by the teeth on the cutting drum used:

In the remaining sections, we will focus on micro-milling.

Micro-milling is performed using essentially the same process as traditional milling, but with a micro-mill drum in place of the standard drum. The smoothness of a finished surface relies heavily on factors such as milling machine speed, how teeth are located on the cutting drum, and the speed (RPMs) of the cutting drum. Depending on specifications, operators may need to proceed at the lower range of traditional milling speeds to meet smoothness requirements, and pay closer attention to milling controls. As a result, because of the higher cost associated with micro-milling, it should only be used when the extra smoothness and other benefits have a positive impact on the final outcome of the project.

Micro-milling can also be used to improve the finished surface of an overlay, and allows more freedom with overlay selection. Because the tighter tooth spacing will produce a smaller ridge to valley depth, the micro-milled pavement provides a smoother paving surface. When traditional milling is used, the subsequent overlay must be sufficiently thick to prevent the transmission of ruts and valleys through to the surface of the pavement. As a result, the smoother surfaces created by micro-milling can facilitate the use of thinner lifts, saving materials and money.

Micro-milling is also particularly suited to rehabilitation projects which incorporate porous or open-graded asphalts. These asphalts are not typically placed on traditional milled surfaces for two reasons. First, the roughness of the milled surface can reflect through the new lift. Second, the ruts in the milled surface can trap water that drains through the surface mix, causing premature damage. For this reason, it is standard practice to apply a dense-graded overlay to a milled surface before placing a porous mix because micro-milled produces a smoother surface that won’t hold any water, allowing porous mixes to be applied directly. In addition, micro-milling allows for the removal of thinner pavement layers, allowing for removal of only the porous surface course. In general, the smoother surfaces created by micro-milling allow for a more uniform overlay, increasing the effectiveness of compaction. However, on standard mill and fill or full depth reclamation projects, this additional smoothness may not be necessary.

Like traditional milling, micro-milling produces material which can be recycled into new asphalt pavements. However, RAP produced by micro-milling is generally smaller in size and more uniform. This means that the RAP from these projects will require less crushing than usual, reducing the costs to meet specifications.

Micro-milling represents an attractive alternative to conventional milling under the right circumstances, and is a fresh approach to surface preparation and increasingly surface rehabilitation. Because this process is relatively new, the long-term performance of micro-milling solutions lacks a wealth of data and experience. However, testing of overlays placed on micro-milled surfaces has shown favorable results. In addition, projects incorporating micro-milling have been able to achieve significant cost savings and also reduce safety risks in the construction zone. As techniques are refined and industry knowledge improves, micro-milling is definitely something to keep an eye on.

3 comments on “Micro-Milling – The Finer Side of Milling”