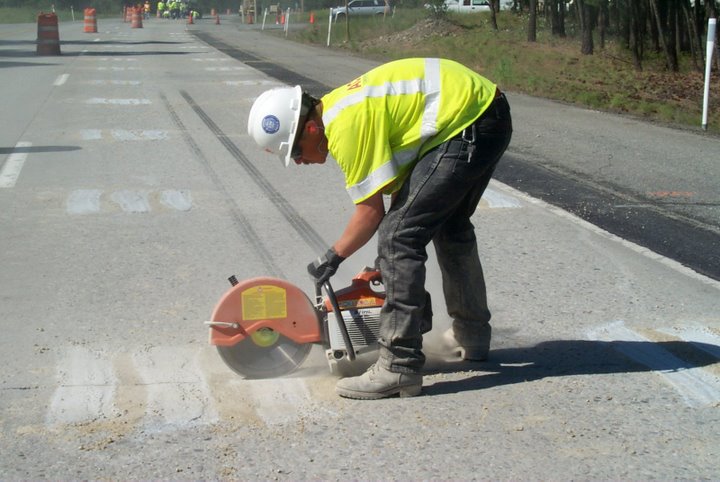 We’ve heard from many of our readers that longitudinal joint construction can be challenging for their paving crews. We’ve all seen failures on our roadways due to poor construction along a longitudinal joint, and since this is such a critical topic for the industry, we are going to spend the next two RoadReady newsletters covering:

Why Do Joints Fail?

Almost all of the reasons joints fail before they reach their expected service life can be attributed to one of the following.

Low Density
Low density is an issue also seen in broader road construction that can lead to numerous distresses including decreased stiffness, reduced fatigue life, accelerated aging/decreased durability, rutting, raveling, and moisture damage. Not to mention, that is one of main metrics on which many road owners pay bonuses (and penalties).  Well constructed joints can be 1 – 2% less dense than the rest of the mat and this is acceptable because they don’t bear the same amount of load as the rest of the pavement, but when joints start to get significantly less dense than the mat (5 – 10% for instance), distress can occur.

Low density in longitudinal joints comes primarily from two sources: insufficient material and poor compaction. When you don’t have enough material in the joint, proper density will not be achieved when the mat is compacted. Lack of material in the joint happens both from not placing a sufficient amount of extra material (a rule of thumb is that you need to place about 20% thicker material on for the hot lane than the previously compacted asphalt mix in the cold lane) or when the paver doesn’t adequately push material against the free edge of the cold lane. There are several paver operations factors that can also lead to insufficient material placement such as paving lanes that don’t follow uniform lines (making it difficult to align and place material for the subsequent lanes), insufficient head of material and using screen extensions that don’t provide the same in place densities as the primary screed.

Proper compaction techniques are also critical to achieving proper density in joints. We’ll talk more about and provide examples of different placements for initial rollover in the next RoadReady newsletter.

Segregation
Material placed at the edges of the mat can sometimes be pushed out beyond the end of the screed. Because this material has been moved further than material at the center of the mat this material has a higher probability of being segregated. This yields larger aggregate materials forming the edges of the pavement. Aggregate segregation can also occur when proper head of material is not maintained by paving too fast and/or not monitoring the flow of material through the paver.

Because of this potential for aggregate segregation, longitudinal joints are subject to the same distresses that pavements with aggregate segregation typically experience because of their lower asphalt content, higher air voids (and subsequent lower density) and rough surface texture like moisture damage and raveling, which is illustrated on the roadway below.

Deformation of Edges Instead of Compaction
When material is unconfined, either at a roadway’s edge or as the first lane is placed, the roller that passes over can cause the material to deform sideways rather than compact. When edges are deformed, it can become much more difficult to align the joint when the next lane is paved. When compacting unconfined edges, special attention to compaction technique is important to ensure proper thickness and density without cracks or dips.

The image below shows material placed that was deformed instead of compacted in several areas.

Failure to Bond
Sometimes longitudinal joints fail because the hot and cold lanes fail to adequately bond with one another with one another during construction.  This reduces the strength of the joint and creates a weakness in the mat that can accelerate deterioration and lead to longitudinal joint cracking. Using a tack coat or heating the cold lane prior to laying material for the hot lane are the most common methods to avoid bonding failures. We’ll look more into how these are done in the next newsletter.

Handwork
Typically, asphalt mix from the hot lane that overlaps the cold lane beyond the joint’s taper is luted back onto the hot side of the joint. This handwork usually results in a coarse surface texture and can, in some instances, result in segregation, which as we discussed above, leaves the pavement vulnerable to distress.

Coming up Next: Constructing a Longitudinal Joint
We’ve covered why longitudinal joints are susceptible to failure and how these situations can occur. In the next RoadReady newsletter, we’ll discuss joint construction methods and the best practices that, when properly performed, will alleviate many of the problems identified when constructing longitudinal joints.