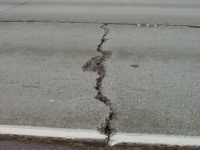 In the last RoadReady newsletter, we introduced a two-part series focusing on longitudinal joints and covered some of the main causes of longitudinal joint failures. And as promised, in this RoadReady newsletter, we’ll discuss best practices for joint construction that, when properly performed, will help you achieve a long lasting, high quality pavement.

While the easy answer to avoiding joint failure is don’t pave longitudinal joints, it isn’t often practical or possible to eliminate joints in paving projects. Roadways are wider than the screed can pave in one pass and traffic usually needs to continue to drive on at least part of a roadway while paving occurs. Let’s take a look at some of the techniques and best practices that can help you construct quality, long-lasting longitudinal joints.

No matter which technique you use to create a longitudinal joint, the first step to creating a quality joint is ensuring that you have a proper mat overlay and enough material in the joint to allow for proper compaction. Inadequate overlap or a lack of material leads to high air voids at the joint (low density), which translates into a pavement that will likely show premature distress. The image below illustrates the anatomy of a longitudinal joint, highlighting joint overlap and extra material.

The standard amount of overlap of the hot lane over the cold is about 1 inch.  Additionally, there should be about 20% additional mat thickness to yield enough additional material for good compaction at the joint.  A good tip is to use end gates on the screed to keep the head of material contained as well as making it easier to maintain proper overlap and sufficient material.

Because joint overlaps are so small, another critical element to paving joints is to operate the paver on as straight a path as possible. If this is not done on the first paver pass, you will end up with wavy, ragged joints, which are hard to match when paving subsequent lanes. If the subsequent lanes aren’t paved uniformly to the initial lane, it is difficult to get the right amount of material in the joint. As we discussed above, lack of sufficient material will lead to improper density and early distresses. A good best practice is to use string lines at least for the first pass to help guide the operator in paving in as straight a line as possible.

Hot Joints (Echelon Paving)
Echelon paving is when you pave lanes side-by-side with adjacent pavers slightly offset. Paving in echelon formation can improve the longitudinal joint between pavers because both mats are hot when they are initially compacted.  Rollers behind the pavers can pass directly over the longitudinal joint while both sides are hot, which typically results in better compaction. The image below shows pavers laying a new roadway in echelon formation.  Echelon paving often requires that you redirect traffic from multiple lanes of a roadway while you pave so it isn’t always practical.

Cold Joints
Most often, roads are paved one lane at a time. Paving a new lane next to a previously compacted and set, referred to as the cold lane, can lead to many of the failures that we discussed last newsletter.  To reduce your chance for premature joint failure, one of the most widely accepted best practice for joint construction is the notched wedge joint.

Notched wedge joints, as shown in the figure above, are formed by extending the joint taper placed on the first paved lane and then notching either end of the taper.  These wedges are formed by an attachment on the paver screed.

When constructing these types of joints, the notches should be at least as deep as the nominal maximum aggregate size of the mix with the taper usually spread out over one foot.  With notched wedge joints, the hot lane still overlaps the cold lane notch by about an inch and is then bumped back to the notch to ensure enough material at the notch for adequate compaction.  Make sure your crews are trained and experienced before performing any handwork through as improper movement of material in and around the joint creates the opportunity for premature roadway distress.

Notched wedge joints help reduce joint air voids and minimize thin taper extremities, which occur when the extra material from the hot lane is compacted thinly across the cold lane. Both these problems can cause poor compaction.

When constructed properly, notch wedge joints show reduced cracking and virtually no raveling.  One additional benefit of notched wedge joint is that they provide a safer ramp for traffic transition between the cold lane and the yet unpaved portions of the hot lane as shown in the image below (image courtesy of WSDOT).

Sometimes no matter the skill of the crew or the joint construction technique utilized, two lanes fail to bond. There are two methods to help increase the likelihood of a proper bond: using a tack coat or heating the joint.

Joint maker
Joint makers are devices that look like boots, attaching to the side of the screed at the corner. A kicker plate is also attached to the side of the paver to lute back the overlapped HMA mix. Joint makers force the extra material at the joint through an extrusion process prior to the screed and as a result, a higher density joint can be constructed because there is less probability for aggregate segregation.

Edge restraining device
An edge restraining device is a hydraulically powered wheel, about 3 inches wide and beveled at 45 degrees, which is mounted on a roller alongside the roller drum to pinch the unconfined edge of the first lane towards the drum. This pinching provides lateral resistance during the first roller pass that keeps the edge from spreading too thin and cracking, increasing the density of the final joint.

Achieving density at the joint is the most important issue when it comes to longitudinal joint construction.  We will discuss some compaction best practices, all aimed at increasing density. The key differences in rolling techniques involve the placement of the roller on the initial pass over or near the joint.

In general, no matter which construction technique you use for making the longitudinal joint, the recommended best practice for compaction is to roll from the hot side with a steel drum in vibratory mode, 6 inches away from the joint for the initial pass and then to roll down the 6 inch section left between the initial pass and the cold lane. This technique pushes the material between the roller and joint towards the joint during the initial roller pass, which crowds the mix at the joint producing a higher density.Longitudinal joint distresses are one of the leading causes of shortened pavement life and increase lifecycle costs. Increasing the longevity of asphalt pavements lowers the lifecycle costs, which positively impacts pavement type selection. And with roadway funds stretching further than ever before, less premature failures mean funding available goes further.