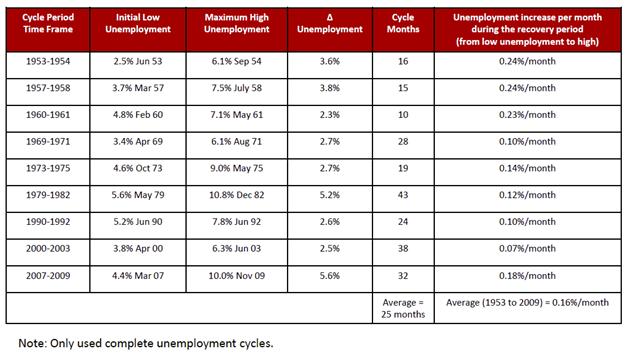 Even though we need roads in both good times and bad, the paving industry is still subject to the economic forces of the world around us. Business depends on factors like the amount of investment in our nation’s roadways, the market cost of materials, and overall employment levels. Many of these factors are cyclical in nature and typically trend in a similar direction to the broader economy. In this edition of the RoadReady newsletter we’ll take a closer look at the unemployment rate as one example of how this works. What it means, in the context of the current economic cycle, is that employment takes twice as long to recover from a recession as it does to fall.

More than any other factor, it seems like the one issue people pay attention to the most is jobs. Construction projects are touted based on their ability to create jobs, the latest unemployment report becomes a hot topic in the news, and consumer confidence is affected by how people feel about their own employment situation. For the paving industry, this means that the number of workers needed on a project, as well as the kinds of people who are available to hire, are both critical to the bottom line.

When it comes to economic cycles, unemployment statistics are widely considered to be a “lagging indicator.” This term refers to the consensus among economists that changes in unemployment tend to lag behind changes in the overall direction of the economy. As things hit bottom and begin to move back up again, the unemployment rate is typically one of the last numbers to change course and start moving in the right direction. Because of its impact on public sentiment and tax revenues, unemployment can be one reason why it may feel like things are still pretty tough, even when other statistics suggest that the economy is generally improving.

A closer look at the numbers reveals another way in which unemployment can be said to lag behind. As we will see, economic recoveries bring unemployment down much more slowly than it rises during a recession. Based on reports from the U.S. Bureau of Labor Statistics, we can examine how quickly the unemployment rate changes. The table shown below covers complete employment cycles going back to the 1950s, focusing on the recessionary part of the cycle where unemployment is increasing.

As you can see, the cycles begin and end in a lot of different places, in terms of the unemployment rate itself. They also vary in the length of time and distance from the peak to the trough, which is the “delta” or the amount that the rate has changed. However, if we combine all of these periods together, we find that the average rate at which unemployment goes up during these cycles is about 0.2% per month. That may not sound like a huge number, but in the context of today’s economy, it translates to about one-quarter of a million people losing their jobs every month.

Unemployment During a Recovery

As with recessions, economic recoveries can be all over the map in terms of where they start, where they end, and how long it takes for them to get there. However, if we compare the figures in the last column, which indicate the rate at which unemployment is decreasing per month, with the same column from the previous table, we find that generally they are a lot smaller. The current economic cycle is not yet complete, but it fits in comfortably with the general trend. Overall, the combined average for these economic recoveries is a reduction in the unemployment rate of about 0.1% per month. That’s only half of the figure at which we saw unemployment increasing during a recession.

In other words, the rate at which jobs disappear during a recession is twice as fast as the rate at which they come back during the recovery afterward. Unemployment actually lags in two ways: it starts improving later in the cycle than other indicators, and the rate of change continues to lag even after unemployment starts coming down again. That’s a particularly pressing problem for the paving industry since the construction sector tends to see unemployment rates that are higher than national averages.

Waiting for Recovery to Take Hold

So when you hear that the economy is doing well in other areas, keep in mind that the impact is delayed and what really matters is jobs. This doesn’t mean that the other statistics are wrong, or that the recovery isn’t really happening. But in terms of this one critical indicator that affects everybody, the numbers show that economic recoveries move a lot more slowly, compared to the speed at which a recession hits.

The recovery to healthy employment levels can be a long, drawn-out process. One of the natural consequences of a recession is a drop in employment. That drop usually has a steep slope, while the recovery is a slow climb by comparison, so it may feel like we’re constantly having to push uphill. While we don’t know how long it will take to get to the top, right now we do know that at least things are improving.

One comment on “Cyclical Challenges – Getting Back to Full Employment”