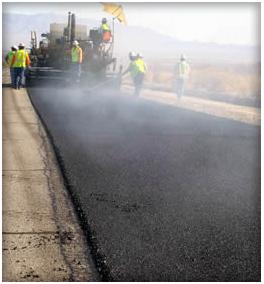 When is a pavement born?  What does it look like when it’s time has come to an end?  These questions weigh heavy on the minds of the increasing number of agencies and institutions that are planning roadway and rehabilitation projects.  While cost is still the driving force behind roadway construction projects, increasingly other factors, such as schedule, contractor reputation, and in particular environmental responsibility are playing a role in the decision making process.  In this edition of the RoadReady Newsletter we’re going to explore the world of Lifecycle Assessment, it’s important to pay attention if someone mentions the term LCA as a part of your project, and some considerations as it is applies to road construction.

What is Life Cycle Assessment?

Life Cycle Assessment, or LCA, is a tool used to summarize the inputs and outputs of a process or product over a period of time.  It summarizes the materials, emissions, energy and products that are required or produced over the lifetime of whatever is being assessed.  Interestingly, one of the first LCAs or a precursor to LCA was a study funded by Coca Cola in 1969 to compare resource consumption and environmental releases associated with beverage containers.  LCA’s origins in factories and packing plants were very practical, as these were obvious point sources of a number of environmental issues.

LCA starts from the gathering of raw materials and ends when those materials are returned to the environment, referred to as cradle to grave.  For instance, a lifecycle assessment of an automobile would include the production of the vehicle, the production of all the fuel used over its life, and the operation and maintenance of the vehicle.  The following tables show how the air emissions results of a lifecycle assessment can be presented for the life of an automobile.

Let’s say we are interested in performing a LCA for a paving project.  This would likely include inputs such as crushed base courses, pavement aggregate and binder, striping, signage, material transport, paving equipment, and roadway maintenance and rehabilitation.  The outputs would be air emissions from material production and construction equipment, solid materials removed from the site or any other environmentally relevant emission that needs to be accounted for.

An important part of LCA is how the boundaries are defined.  LCA can include absolutely everything from cradle to grave, but to do so would be quite an undertaking and not worth the time.  For example, it is probably not necessary to include the production of the machinery used to produce a batch plant in an asphalt pavement LCA. This process is so far removed from the processes we are really interested in that the environmental impacts will be miniscule compared to the actual construction process.  It is typical for a roadway project to include just the project equipment, materials, transportation and the primary manufacture of all the materials, fuels and energy.

Another critical component for determining LCA is the analysis period, or time over which to examine the environmental impacts.  For a paving project an analysis period should be used that includes rehabilitation as well as initial construction.  Typically, when comparing pavement options, a period of 40 or 50 years will be used to include initial construction and several rehabilitation activities. If too short of an analysis is performed, you do not get the full picture.  In our car example above, if only the vehicle production were considered, we would not observe a majority of the air emissions from the life of the vehicle.  The same thing goes for a roadway project if it were only analyzed over a 10 year life.  We would miss all of the inputs from the maintenance and rehabilitation, which can be quite significant.

It is important to only compare assessments that carry the same assumptions, have similar analysis periods and have consistent system boundaries.  For instance, while comparing paving options it is important that they have the same loading, equivalent dimensions and similar use.  It is also helpful if comparisons use similar data sets throughout, as it can be difficult to get reliable data and different sources may make different assumptions or have different limits.

Another difficulty that can apply is where the birth, or beginning of the assessment, starts.  For example, when considering an asphalt pavement, does one include the embodied energy, as it is a petroleum product? Proponents of the asphalt industry say no because of the disadvantage this creates for the asphalt industry.  Concrete proponents say yes, include embodied energy in asphalt LCA’s because that helps the case to choose concrete as the roadway material.  We will let the representatives from the two industries fight it out as to which constitutes the proper LCA boundaries.  That being said, most LCA tools have already made an assumption on this topic and a little research might be required to find out what has been included and excluded.

LCA has already been implemented as government policy in a few cases, such as the US Federal Government Environmentally Preferable Purchasing Program and the Energy Independence and Security Act, as well as in many EU laws and regulations.  Several state Departments of Transportation, including Washington and California, have funded research to establish common practices for conducting LCA of pavements. It is only a matter of time before all roadway projects will perform lifecycle assessment during design.

There are several LCA tools currently available to the public although there are not many roadway specific LCA tools.  One available example of a tool created specifically for use with roadways and in use today is PaLATE.  PaLATE was developed to include initial construction materials, transportation, and equipment as well as rehabilitation materials, transportation and equipment.  Tools such as this simplify the LCA process but also limit the system boundary designation.  This assumption can make it difficult to include newer technologies or construction practices so one should consider that as they look to incorporate LCA on their project.

In all, LCA can provide decision making guidance to help reduce the environmental impact of maintaining our aging infrastructure network.  It appears that LCA is going to become more prevalent over time in roadway construction projects, so it is important that you understand how the challenges described in this newsletter are addressed in your local situation and how they impact your project.

For a more in depth read on how LCA works, the International Organization of Standardization (ISO) has come up with a set of standards for the LCA process.  See ISO 14040 and ISO 14044 for how LCA should be done and guidelines to do so.