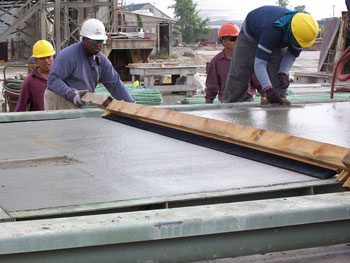 What does the texture of a road mean? Imagine if you were a car driving on the road, how would you describe the feeling? Would you say it was harsh and scratchy? Or does it feel slick and slippery? Somewhere in between is probably just right, where the road feels pretty smooth but there’s still enough texture for a vehicle to maintain a good “grip” with its tires. In this edition of the RoadReady newsletter, we’ll look at techniques for creating texture in Portland Cement Concrete (PCC) pavements.

Texturing is a critical step in PCC construction between placement and curing. After the PCC has been placed and consolidated, the surface will need finishing, texturing, and tining (discussed below) to produce the desired appearance and friction. Finishing refers to leveling or smoothing the concrete so that the pavement surface has the correct profile. The initial finish is provided by the screed or slipform paving equipment. Further finishing can be performed either mechanically or by hand, but generally should be kept to the minimum necessary to correct imperfections.

Without additional work, the surface would be too smooth for traffic, so texturing and tining are used to provide friction and skid resistance. These activities are performed while the concrete remains workable enough to create texture in the pavement surface. Once the pavement is opened to traffic, the texture can also affect the noise made by vehicle tires on the concrete.

Finishing, texturing, and tining should proceed quickly in order to begin curing as soon as possible. With most texturing techniques, the pavement texture can be created in either a longitudinal direction or a transverse direction. Either approach will work, but specifications may require one or the other for a particular project. Transverse tining is sometimes also skewed, so that the texture pattern crosses the pavement surface at an angle.

Texturing involves dragging a broom, a piece of burlap, or a section of artificial turf across the concrete to produce a uniform, gritty surface texture. When slipform equipment is used, it may be possible to drag burlap or turf directly behind the concrete paver. If not, texturing should be performed using a construction bridge that spans the pavement to drag the burlap or artificial turf at an even rate.

For drag textures, the burlap or turf blades should produce striations of about 1.5-3 mm (1/16 to 1/8 in.) in the concrete surface. Texturing equipment should be checked for wear and monitored to avoid clogging with clumps of concrete. The weight placed on the drag needs to be evenly distributed to produce the proper texture. The level of difficulty in texturing also depends on the amount of moisture in the concrete mix.

Tining refers to pulling a metal rake across the surface to create grooves in the pavement with a depth of between 3-5 mm (1/8 and 3/16 in.). This can be done by hand on smaller areas, but in most cases is accomplished by attaching the tining head to a mechanical device that moves across the pavement. The head has a series of fixed wires on it that produce the grooves in the pavement surface. The grooves are typically slightly deeper than the striations from drag texturing, as the spacing and depth of tine grooves can have an impact on tire-pavement noise. In general, narrow and deep grooves minimize noise better than wide, shallow grooves.

For longitudinal tining, the wires are normally uniformly spaced 20 mm (3/4 in.) apart to produce a set of regular, parallel grooves. In transverse tining, random spacing may be used instead to reduce noise, with the wires set at different distances from each other so that overall, they average either 13 or 26 mm (1/2 in. or 1 in.) apart. The FHWA has recommended the tine patterns shown below to achieve sufficiently random spacing for transverse tining.

The most common methods of creating texture involve working with the concrete immediately after placement. At this point, the cement has not yet fully cured or hardened, so the concrete remains workable enough for flexible equipment like a burlap drag to apply texture. Texture can also be applied to hardened concrete, but in that case you need more intensive equipment.

Post-construction texture is usually applied by diamond grinding. This technique involves equipment with diamond blade saws mounted on a cutting head which grind off about 6 mm (1/4 in.) of the pavement surface. The grinding produces surface texture in a longitudinal direction and also helps remove irregularities in the pavement surface. As a result, diamond grinding can sometimes serve as a technique for pavement rehabilitation in addition to texturing.

Because texture is only applied to the surface of the concrete, it is vulnerable to being worn away by traffic and environmental factors. In cold-weather climates, pavement texture is often lost due to studded tire use and snowplow activity. Research by the Washington State Department of Transportation (WSDOT) indicates that none of the available texturing techniques will significantly improve a pavement’s resistance to wear from heavy studded tire use. However, the WSDOT study did conclude that drag textures and longitudinal tining could perform at least as well as transverse tining in other pavement qualities for which texture is important, such as ride quality and acceptable noise levels.

Although it focuses on the pavement surface, texturing is hardly a superficial matter. The friction and skid resistance it provides are a critical contribution to the safety of the pavement. The effect of texturing on smoothness and noise are also significant considerations. Texturing is an important PCC construction practice for a pavement to “feel” good, so we can feel good about it too.