Good roads are more than my hobby; they are my religion. – Sam Hill

Sam Hill, 1857-1931, built roads. He was born May 13, 1857, a Quaker, the fourth of six children. Roads ran in his family; Sam’s father, Nathan Bronson Hill, was a country doctor. Nathan Hill supported better conditions for farmers, proposed better roads, and was instrumental in building 44 miles of plank roads in North Carolina.

Sam Hill believed that better roads would assist in population growth, the industrialization of the United States, and especially increase the movement of farm people and goods to the city. Hill knew that transcontinental railroads could not go everywhere, and good roads would be an excellent adjunct to rail transport. Highways were considered, at the time, to be the toes and fingers of the railways, which were the arms and legs of the system.

In 1909, transporting farm goods to market by rail (at one ton per mile) cost ¾ cent, while the same goods on a country road cost 30 cents to travel the same distance. Better roads would bring higher quality goods to market faster.

Two important developments boosted road development. First, the discovery of petroleum in abundance made engine fuel cheap; and second, mass production of automobiles brought the cost of ownership down. But all of these cars needed roads.

Sam Hill worked odd jobs from ages ten to eighteen. He went to several colleges, including Harvard, from 1878 to 1879. During his summer vacations, he often worked with the geological survey.

Sam and Mary Hill’s first child, Mary Mendenhall Hill, was born July 3, 1889. She was possibly schizophrenic and suffered from depression throughout her life.

Employment and Education Early as an Adult

Hill began working in law and real estate in 1879. He returned to Harvard for law school in May of 1881 but obtained no degree. After law school, he returned to practice law, passing up profitable cases for those he believed in. Hill excelled at memorizing books of law.

Sam planned 85 miles of roads out of Minneapolis which were never finished nor surfaced.

Hill made millions of dollars on the stock market and became a world traveler and friend of royalty. A notable visit of Hill’s was to the Trans-Siberian Railroad in May and June of 1901. 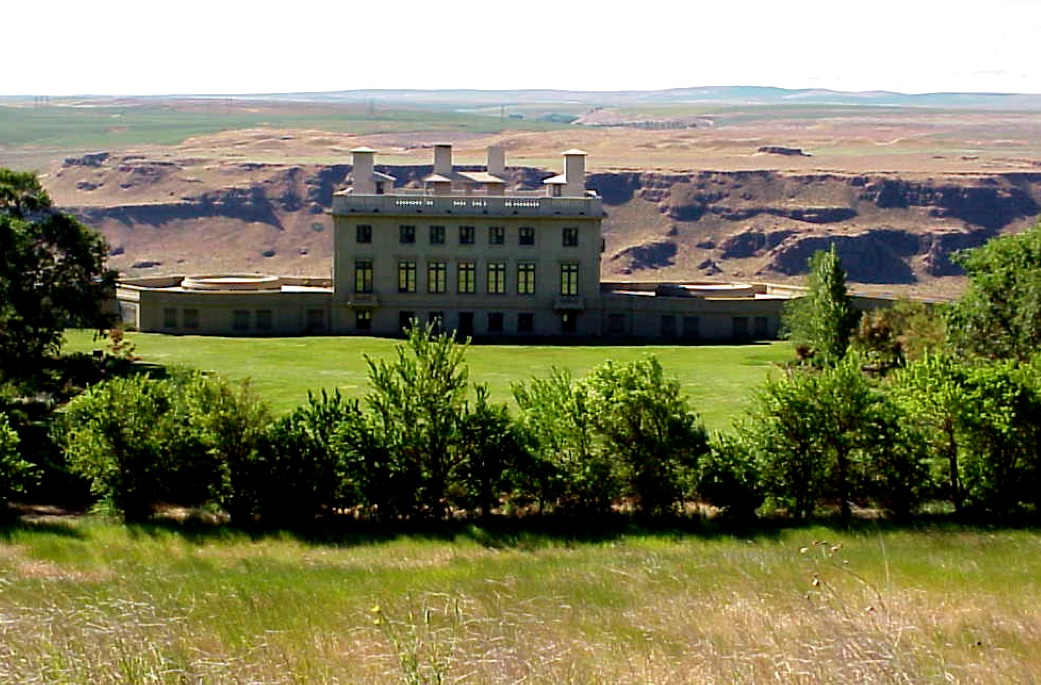 Sam and Mary Hill moved to Seattle in December of 1901 in order for Sam to take over the Seattle Gas and Electric Co., leaving the railroad business behind. However, Mary Francis left Seattle in 1903. Mary Mendenhall (Hill’s daughter) initially stayed with her mother, but moved back with her father in Seattle in April, 1910.

Sam helped Seattle by promoting the paving of streets and boulevards before the 1909 Alaska Yukon-Pacific Exposition. He erected a Good Roads building, endowed a chair in road engineering at the University of Washington, and promoted Seattle as a port city.

In September of 1899, Sam and a few friends formed the Washington State Good Roads Association. Hill was the president through 1910, and remained the honorary president for the rest of his life. He supported policy favoring a highway system built and developed by the state.

In 1900, Sam Hill appeared before the US Senate to propose good roads. In the following years, his activities on Good Roads continued to escalate. He corresponded with Martin Dodge, the director of the Office of Public Road Inquiries of the USDA, in 1902. Dodge proposed the federal and state government ought to contribute to a fund for highway improvement. This policy did not come into effect until 1916, and was to be called the Federal Aid Highway Act. Hill addressed the Washington State Legislature in 1903, suggesting a law authorizing convicts’ work on road construction – a law which passed. In 1904, Hill assisted in creating a committee to study the road laws of other states as a basis for developing a Washington State highways organization. The following year, the legislature created a state highway board, the members of which were appointed by the governor.

By 1906, Sam Hill and Samuel Lancaster were associates. James Wilson, the Washington Secretary of Agriculture, had persuaded Hill to meet Lancaster at a roads meeting in Yakima, Washington. Hill quickly asked Lancaster to spend six months helping to start a road program in Washington. Lancaster brought his family to Washington to assist Hill, eventually resigning a federal position to continue the work.

Sam Hill had helped to create a chair of highway engineering in 1907, the first such chair in the country, at the University of Washington. Hill and Lancaster to addressed highway committee hearings for the Washington State Legislature. In March of that same year, the legislature passed all ten laws that Hill and Lancaster had requested in the hearings.

Hill and Lancaster, along with R. H. Thompson, the City Engineer of Seattle, went to the 1st International Road Congress in Paris in October 1908.

The 1st American Congress of Road Builders was created in 1909. A “Good Roads Building” was erected to display exhibits of road construction methods. This building was later to become the home of the Department of Highway Engineering at the University of Washington.

In a NY Times interview in late 1909, Sam Hill deplored the condition of America’s roads. In order to research how to build better roads, he built experimental roads costing $100,000 to build, which was a great deal of money back in his day, at his estate, Maryhill. Lancaster assisted in the engineering and building of seven types of experimental roads, over ten miles. The roads traveled from Maryhill to the old road to Goldendale, Washington. This stretch included the Maryhill Loops, which ascended 850 feet in 3.6 miles up canyons, curving torturously. Throughout, Sam advocated federal aid for research in road building, while paying out of pocket for the Maryhill roads.

The Maryhill experimental roads were created to demonstrate the best types of binding material and rock to withstand the wear and tear of driving and variations in temperature. The roads were intentionally varied in composition and construction. Hill built two horsedrawn wagons designed by Lancaster exclusively for hot mix. Each wagon carried four cubic yards of asphalt.

Sam Hill dreamed of a transcontinental road. “If I live long enough, I am going to see a highway built through British Columbia down our own coastline, clear to Mexico and it’s going to be a hard surfaced road.”

Finally Sam got some recognition for his roads, in 1913. Oregon’s Governor, West, and all of the state legislature (88 people, total) came to Maryhill to inspect the experimental roads, The state of Oregon gifted $10,000 to Hill for Oregon state highways.

Sam Hill and several associates took a trip on the proposed route of what would become the 48 mile long Columbia River Highway. The site was challenging, with ropes needed to get up and down the rocky slopes on the route from Portland to Cascade Locks. They planned a two-lane highway and constructed it in two years, from 1913 to 1915. Sam Lancaster was the consulting engineer on the project, while labor was done in part by convicts.

In 1913, in an interview, Sam said, “Great Highway from Canada to Mexico underway.” His statement, however, was optimistic. The Pacific Highway wasn’t completed until 1923, but it was the longest continuously paved road in the world. It traveled from Vancouver, B.C. to Tijuana, Mexico, a total of 1687 miles.