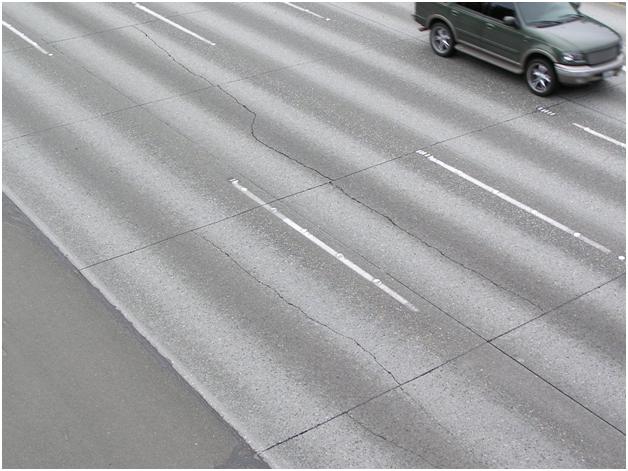 Both asphalt pavements and concrete pavements can develop cracks, though not always for the same reasons. Previously, we looked at some common types of cracks in asphalt pavements, their causes, and how to deal with them. In this edition of the RoadReady newsletter, we’ll do the same for cracking in portland cement concrete (PCC) pavements.

Since PCC shrinks as it sets and cures, some amount of cracking in concrete pavements is inevitable. In fact, the different types of concrete pavements have their own ways of dealing with this. For example, jointed pavements (JPCP or JRCP) are cut with a saw during construction so that the concrete will crack at the slab joint by design instead of elsewhere. In reinforced pavements (CRCP  or JRCP), the reinforcing steel is used to hold the concrete tightly together, so the shrinkage cracking that may appear is less of a problem.

Other forms of cracking in PCC pavements are a serious concern, however. Let’s take a closer look at four common types of PCC distress cracking:

Linear cracking, sometimes also known as panel cracking, refers to cracks that divide a slab into two or more pieces. These cracks will not necessarily run in a perfectly straight line, but they do extend across the entire slab; that is, each crack runs either edge-to-edge or until it reaches another crack. Linear cracking includes transverse cracks (running across the slab) and longitudinal cracks (running in the direction of travel) as well as cracks in a diagonal direction. Slabs with multiple linear cracks are considered divided or shattered slabs.

The cracks can develop due to a variety of factors. These include overloading, thermal expansion and contraction, moisture stresses, slab curling, and loss of support underneath the slab. Often a combination of factors is involved, and traffic loads usually contribute to some degree.

In mild cases, such as a slab with a single, narrow crack, a repair may be as simple as filling the crack with a sealant. If a dowel bar retrofit is being considered for the pavement, cracks that are working cracks (meaning they behave like joints, with a similar range of movement), should also have dowel bars installed to help with load transfer.

More extensive cracking will require at least a patch to repair. Patches will need to be full-depth, since these cracks are not just surface distresses but extend through the entire thickness of the slab. If the cracking is severe enough, the slab is shattered and the appropriate repair would involve complete slab replacement.

Corner breaks can be caused by repeated traffic loading and may be an indication of poor load transfer across the joint. Other potential factors include a loss of support along with warping and curling stresses.

If the slab is otherwise in good condition, a corner break can be repaired with a full-depth patch. The patch will fix the primary crack as well as any additional cracking within the broken-off corner piece. If the corner break is partly due to loss of support in the base or subgrade, this should be remedied as part of the repair. Otherwise, another break may appear and the patch is not likely to hold.

Punchouts are localized areas where the slab is cracked and broken into several pieces. Unlike linear cracks, punchout cracking is primarily confined to one part of the slab, so the cracks do not extend from edge to edge. Punchouts come in many different shapes and sizes. However, most punchouts form near a linear crack or pavement joint that helps define the punchout area.

Causes of punchouts include repeated heavy loads, inadequate slab thickness, and loss of foundation support. Punchouts may be the product of a localized construction deficiency, such as honeycombing in the concrete or inadequate consolidation while the pavement was being built. In continuously reinforced concrete pavements, punchouts are of particular concern and may indicate steel corrosion or an inadequate amount of steel for reinforcement.

A punchout can be repaired with a full-depth patch covering the punchout area. Take care to identify and resolve any underlying problems, such as loss of support or inadequate reinforcement. Fixing these will help prevent the issue from reoccurring.

Durability cracking, simply known as “D” cracking, usually appears as a pattern of closely spaced cracks near a joint, corner, or linear crack. The cracks typically run approximately parallel to each other and the cracking will progress outward over time, eventually leading to disintegration of the slab if it is not corrected. The cracks may contain characteristic dark-colored deposits if the concrete becomes saturated and material collects there.

Durability or “D” cracking is caused by a specific problem with the large aggregate in the concrete mix. If the aggregate is susceptible to expansion during freeze-thaw cycles, it creates stresses in the PCC that eventually cause the pavement to fracture.

Due to the nature of the problem, durability cracking is challenging to deal with. A patch can repair the affected area, but does not address the root of the problem and will not prevent cracks from spreading through the rest of the pavement. In the past, some agencies would treat durability cracking by placing an asphalt overlay on top of the pavement. This can temporarily address the surface distress and improve the pavement’s ride quality, but still fails to prevent the progression of the cracking.

Ultimately, pavements with durability cracking will need to be completely replaced as the deterioration accelerates. Obviously, this makes it an expensive and time-consuming problem. The real solution is to test aggregates before they are used in PCC construction to ensure they are not susceptible to freeze-thaw expansion.

As we’ve discussed, cracks can sometimes be sealed, patched, or repaired by replacing the affected slab. These measures are useful options, but in many cases the cracking could have been prevented. Good pavement design and following best practices during construction will avoid a lot of problems. It is a lot easier to prevent crack problems in the first place, rather than trying to cure them once they are in your pavements.  Just “say no to cracks!”

2 comments on “Filling in the Cracks”