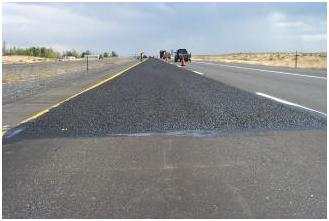 Do you have asphalt pavements that are holding up pretty well, but look a little worn? Maybe you’re seeing some mild cracking or the roadway is a bit rough in spots. Chances are you will want to apply some kind of seal or surface treatment to preserve the pavement condition, but like picking the right outfit for the prom, selecting the right one can be a daunting exercise. In this edition of the RoadReady newsletter, we’ll look at what goes into some common types of seal treatments and how they are used.

Pavement preservation is becoming increasingly important as agencies try to maintain their roads in the face of shrinking budgets. Focusing on preventive maintenance, like seals for asphalt pavements, is often a good way to improve performance at a relatively low cost. A quality seal treatment can help a pavement last longer and look better at the same time.

A crack seal involves filling a crack in the pavement surface with an adhesive sealant, usually asphalt binder or an emulsion of asphalt mixed with water. Crack sealing is normally focused on cracks that are not load-related. Prompt treatment of individual cracks can help prevent pavement deterioration from accelerating as cracks grow, develop secondary cracks, and begin to spall around the edges. Sealing the crack will keep water and incompressible materials (dirt, sand, debris, etc.) from infiltrating the pavement structure.

A proper crack seal involves more than just filling the crack. The crack should be routed to clean out any existing debris and create a reservoir for the sealant. A backer rod may be inserted to keep the sealant material from draining to the bottom of the crack. Crack sealing, as opposed to crack filling, is particularly recommended for working cracks (cracks that experience significant horizontal movement), reflective cracking, and in general for most transverse cracks.

A slurry seal is a mixture of asphalt and well-graded fine aggregate. The asphalt is normally a slow-setting emulsion, and modifiers or mineral filler may be included in addition to the aggregate. Slurry seals typically work best with pavements that are in good condition but may be showing signs of aging. For example, a local municipality could use slurry seals as part of a preventive maintenance program to improve the condition of pavements that are still performing well after several years of service.

Treating a pavement with a slurry seal helps improve skid resistance and restores a uniform surface texture. It also seals the pavement surface to fill cracks and prevent the intrusion of moisture or air into the pavement.

Like a slurry seal, a sand seal uses an asphalt emulsion along with sand or fine aggregate. However, the materials are not applied as a mixture, but one at a time. The emulsion is sprayed onto the pavement surface first, after which the sand is applied. The sand can be spread immediately for maximum stick, or wait until after the emulsion breaks and be rolled with a pneumatic tire roller. Sand seals primarily work to seal the pavement surface and improve skid resistance.

The materials for a scrub seal are similar to a sand seal, consisting of an asphalt emulsion and finely graded aggregate. However, as an additional step after the emulsion is applied, a broom is dragged over the pavement to push the asphalt into cracks and voids in the surface. The aggregate is then applied, followed by a second pass with the broom mechanism to force the aggregate into the emulsion. This scrubbing action may allow the seal to fill cracks that might otherwise need to be sealed individually.

A chip seal uses a two-step process in which the pavement is sprayed with a coat of asphalt and then covered with coarse aggregate. The seal coat is normally an asphalt emulsion and should have a high viscosity to help embed the aggregate in the asphalt. The aggregate should be uniformly graded and must be rolled after placement to ensure proper embedding. A chip seal is useful for improving surface friction and to seal a pavement with mild cracking that is not load-related. On low-volume roads, a chip seal may be used as a wearing course.

Chip seals can be applied in multiple layers if desired. While a typical chip seal involves a single coat of binder and aggregate, a double chip seal can be used if a harder, longer-lasting treatment is needed. In a double chip seal, after the first layer of aggregate has been rolled, another seal coat is applied. This is followed by a second layer of aggregate, which should be graded to about half the size of the aggregate in the first layer.

A sandwich seal consists of an application of asphalt binder in between two layers of aggregate, hence the name. Sandwich seals are similar to a double chip seal, but without the first layer of binder. Instead, the coarse aggregate is placed directly on the existing pavement surface. This type of treatment might be considered for a pavement that exhibits bleeding or flushing.

A cape seal is effectively a combination of two separate treatments, a chip seal and a slurry seal. The chip seal is placed first, followed within a few days or weeks by the slurry seal. This enhances the binding of the chips with the asphalt and prevents loose aggregate from being dislodged. Cape seals provide a new wearing surface and can address more significant deterioration than either of the treatments individually. They can be an effective treatment for pavements where some distress is present, but a more expensive overlay is not required.

The right kind of seal treatment to choose will vary based on environmental and traffic conditions, the age and condition of the pavement, and other factors such as its intended service life. In some cases, combining multiple treatments may be helpful to get the benefits from each type. One possibility is to combine crack sealing with another type of seal as a surface treatment. Seal treatments can also be re-applied every few years for maintenance as long as the pavement remains structurally sound.

Another technique used with certain types of seals is to add rubber to the asphalt mix. Ground-up pieces of tire rubber can be added to the asphalt binder as a modifier. For example, rubber can add elasticity to the sealant used for a crack seal. Rubberized asphalt could also be used in a chip seal to try and reduce reflection cracking.

Seal treatments are a critical tool for asphalt pavement preservation. With proper design and taking into account the condition of the existing pavement, seals can be useful for any roadway, including those with higher traffic volumes. All it takes is selecting the right tool.

To learn more, check out the following sources:

Transportation Research Board. 2011. Guidelines for the Preservation of High-Traffic-Volume Roadways. http://onlinepubs.trb.org/onlinepubs/shrp2/SHRP2-S2-R26-RR-2.pdf

5 comments on “Sealing the Deal on Pavement Preservation”