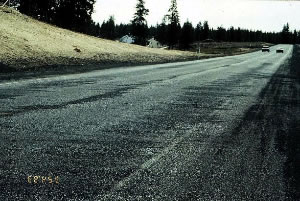 As we begin to approach the winter months, drivers and transportation agencies in certain regions have to prepare for the possibility of snow and ice on our roadways. From an agency standpoint, this means the prevention and removal of snow and ice in an attempt to keep roadways clear. This commonly takes the form of measures such as plowing, as well as chemical and physical treatments. Drivers, on the other hand, have to make sure their vehicles are equipped for any snowy conditions they might encounter. This usually involves modifications to the tires of vehicles, through use of chains, snow tires, or studded tires. While it’s important to keep drivers safe in the presence of snow and ice, many of the devices mentioned above can damage roadways. In this RoadReady Newsletter, we’re going to take a look at different snow and ice safety measures, as well as any related concerns.

A studded tire for snow and ice driving

Let’s start by listing some equipment that drivers can use to make winter conditions safer. Generally, these represent tire modifications that increase the friction between the tire and any snow and ice on the road. This increases the driver’s ability to control the vehicle and reduces the likelihood of accidents. However, modifying the interface between the vehicle and roadway also changes how the pavement is affected. Some types of snow protection can cause serious damage to roadways. The three most common types of safety equipment are snow tires, studded tires, and tire chains. Let’s explore each of these in more detail.

Of the three options listed above, snow tires are the most similar to everyday tires. However, snow tires have some key differences that improve their performance in snowy and icy conditions. In cold weather, the rubber that makes up a normal tire can become hard and stiff, reducing the traction between it and the roadway surface. Snow tires use softer rubbers which allow for better grip in colder months. In addition, snow tires utilize deeper grooves to create more contact with a snowy surface. Finally, snow tires are patterned to funnel moisture away from the tire-roadway interface, further increasing traction.

Snow tires increase vehicle safety in snowy conditions. However, because they are constructed of a soft rubber, they generally don’t cause any additional wear and tear on the roadway.

Studded tires use some of the same technologies present in snow tires, but take things a step further. These tires incorporate a number of metal studs that protrude from the outside of the rubber surface of the tire. A studded tire may contain up to 120 studs which can protrude up to 1.5 mm from the rubber. These studs are typically composed of tungsten carbide. The studs on the tire surface bite into icy surfaces as the tire rolls, increasing traction in slippery conditions. The exact design of tire studs has changed significantly since their creation. While we won’t cover the details here, be sure to check out the blog for additional resources.

However, the safety afforded by studded tires comes at a cost to highway infrastructure. A wealth of research has shown that tire studs can cause significant damage to pavements. The hard metal studs have three major effects on a surface, including accelerated rutting, polishing of surface aggregate, and removal of pavement markings. These are the result of material being dislodged from the pavement surface by the studs.

Knowledge of the detrimental effects of studded tires has been serious enough to lead to laws regulating their use in a number of regions. In the U.S., nine states have banned the use of studded tires altogether, while another 27 limit their use to certain months of the year. Only 14 states have no regulations regarding studded tire use. Other countries that no longer allow studded tires include Japan, Germany, Holland, and Belgium.

The third class of safety device commonly used by drivers is tire chains. These are typically used in areas with heavy snow and ice, and are sometimes required for travel in these areas by regulating authorities. Chains are not permanent features of the tire, but can be attached and removed as conditions dictate. At low speeds, tire chains provide a significant amount of traction on packed snow or ice.

While driver measures focus on adjustments to their personal vehicles, roadway agencies are tasked with making sure that the roadway is as safe a driving environment as possible. This is accomplished by either physical removal of snow, or addition of chemical or physical agents to prevent snow formation, accelerate melting, or improve traction. Let’s take a look at these different strategies.

Snowplows are probably the most visible and well known of snow-removal strategies, and consist of a scraper mounted on a heavy duty vehicle. The scraper pushes snow to the side and out of the roadway. In some devices, scrapers are combined with rotating brooms or blowers.

Like studded tires and chains, plowing can accelerate the deterioration of the pavement. If the blade of the scraper is set too low, it can pick individual aggregate particles from the surface. This accelerates raveling in the pavement, and can also remove pavement markings. Other objects, such as centerline “turtles”, can be removed from the road as well.

Finally, transportation agencies can apply a number of treatments to the roadway to improve driving conditions. Salts, in particular sodium chloride, lower the freezing temperature of water. This can be applied in a liquid or solid form to the roadway. It can be used preventively before snow and ice are present to limit their formation, or after they are on the roadway to accelerate melting. Because salts work by lowering the freezing point of the snow and ice, they are only effective above a certain temperature. As a result, while sodium chloride, or table salt, is the most commonly used de-icing agent, other compounds may have to be used as temperature dictates. Finally, sand can be added to snowy or icy areas of roadway. While sand doesn’t promote melting of snow and ice, it increases the traction for vehicles driving on it. Sand is most appropriate at intersections, sharp turns and steep slopes.

These treatments can cause their own set of problems for roadways. De-icing agents generally contain corrosive materials. As a result, if these liquids are allowed to infiltrate reinforced concrete pavements, the reinforcing steel can be damaged over time. This effect can be minimized by proper joint construction techniques when the pavement is built. Sand and other particulates should be used carefully as well. These can be particularly damaging on porous pavements, as particles can clog up the pores and limit the functionality of the pavement. This can reduce drainage, creating a more dangerous driving environment.

The More You Snow

Driving in the ice and snow is hazardous, and the proper safety precautions should always be taken by drivers as well as roadway agencies. However, both parties should be aware of the issues associated with different safety measures. When the snow melts, we all want to have a safe, smooth surface left to drive on. With the proper planning, roads can be kept safe through the winter without causing undue damage to our infrastructure.