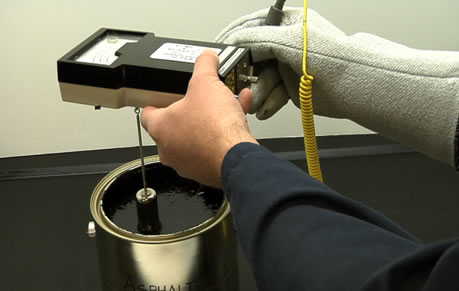 Being an asphalt binder isn’t all fun and games. These days, there’s a lot of pressure for them to keep their grades up so they can land a competitive construction job. Decades of experience with asphalt paving has created a very thorough understanding of different asphalt binders and their properties. In modern road construction, we know that we can’t just use any binder in our pavements; we need to determine the right one for the project at hand. Currently, testing attempts to evaluate these central properties of asphalt and characterize them according to:

These characteristics determine whether or not an asphalt binder is suitable for a certain application. Both in the past and in modern construction, the results of these tests have been amalgamated into a single “grade”. These grades have evolved over time to become more comprehensive and useful. In this edition of the RoadReady Newsletter we will explore some of the grading systems that have been used in the U.S.

Penetration grading was a binder grading method used starting in the early 1900’s. The test involves applying a known force to a pin over a given time frame and measuring how far it will penetrate an asphalt sample. While basic, this test was empirically linked to asphalt performance. Softer asphalts that allow more penetration are suitable for paving in cold weather, where other asphalts may become too stiff and exhibit thermal cracking.  The actual penetration grading is defined as the distance that the pin travels in millimeters multiplied by a factor of ten. Typical values for U.S. road construction are between 60 and 100. To sufficiently characterize an asphalt sample, this test is combined with measurement of flash point, ductility, and solubility to determine a composite grade. In addition, a thin film oven can be used to simulate the aging that occurs during the mix production process in an asphalt plant, helping to characterize how the asphalt will perform as part of the actual roadway. The viscosity grading was developed after the penetration grading and represented a more refined version of this test. Rather than measuring a representative metric, the viscosity grading determines a real physical property of the asphalt. Tests are taken at 140° F and 275° F to determine the absolute and kinematic viscosities. These temperatures respectively represent the highest temperature that a typical road surface will reach throughout the year and the temperature at which asphalt is placed. The test was later expanded to determine viscosity for asphalt that has been artificially aged using a thin film oven. Like in penetration grading, this simulates the condition of the asphalt after it has been through the production process and placed in a roadway. Viscosity measurements are done in conjunction with tests of penetration, flash point, ductility, and solubility. Grade is reported by the state of the asphalt when it is tested along with the viscosity measured in hundreds of poises. Grade values range from 2.5 to 40 for the unaged asphalt (denoted AC), and from 10 to 160 for the aged asphalt (denoted AR). The Superpave performance grading (PG) is used almost exclusively throughout the U.S. today, and provides a more comprehensive grading system than either of its predecessors. Part of the Superpave system, the PG asphalt binder specification was introduced alongside the Superpave mix design method. Grade determination under the Superpave system involves testing of characteristics such as stiffness, tensile strength, and rheology. In addition to using the thin film oven mentioned earlier, a pressure aging vessel is used to simulate further aging. Individual tests must be performed at specified points of “aging” to be relevant.

Based on the notion that different characteristics of asphalt are required for different climates, the Superpave system specifies asphalts that are suitable for specific temperature ranges. This range is reported as two whole numbers, preceded by the letters PG. The first number specifies the average seven-day maximum pavement design temperature while the second number represents the expected minimum pavement temperature. Both are reported in degrees Celsius, and the second number is always negative. For example, a PG 64-22 is suitable for an environment where the average seven-day maximum is 64 degrees, and the absolute minimum is minus 22. These values dictate the temperatures at which the tests listed above will be performed.

Use of Binder Modifiers

Generally when the two temperatures differ by 90° C or more, modifiers must be added to the asphalt. Modifiers can increase or decrease the stiffness of the asphalt at certain temperatures, improve the adhesion between binder and aggregate, increase tensile strength of the mix, and have other effects. These can bring asphalts within specification for their designated temperature range.

Asphalt binder grading provides us with a common language to characterize asphalt for roadway projects. The body of research and experience behind modern methods allows confidence that a particular grade of binder will perform to standard on the appropriate project. With the Superpave performance grade, we can actually simulate how binders will perform throughout a pavement’s lifetime and make sure that only straight-A asphalts make it into our roads.