Skip to content
Pavement Interactive > Pavement Articles > Studies with Warm Mix – Where are we now? 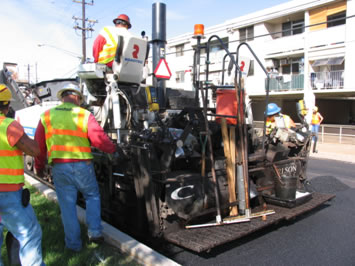 With growing concerns about the rising cost of fossil fuels and the desire for increased sustainability in paving, warm mix asphalt, or WMA, has become a point of focus to nearly everyone in the paving community. Warm mix asphalt technology allows mixing and paving to be conducted at lower temperatures, reducing fuel costs and emissions while allowing longer haul distances and longer paving seasons. While these benefits have been well tested and documented, what has been missing from the warm mix world is a body of long term performance data.

Simply put, warm mix has not been around for long enough in the U.S. to see how it will perform during the regular lifetime expected of an asphalt pavement. Even in Europe, the birthplace of warm mix, the original warm mix pavements that were created in the late 90’s are just now starting to near typical asphalt pavement “retirement age”. Because 15-20 years is a long time to wait before fully implementing warm mix, many roadway agencies are using other methods to test their warm mixes, either by performing simulations in the lab or examining younger pavements and trying to predict what will happen to them. In this week’s RoadReady newsletter, we’re going to check in with the warm mix world, and see what we’ve learned so far and what we still need to find out.

Premature rutting has been a concern about warm mix pavements

What are the issues to consider when comparing warm mix and hot mix?

Before we go into agency experience, let’s discuss some common issues that are considered when comparing hot mix asphalt pavements to warm mix pavements. First, some engineers have been concerned that because of the low production temperatures, asphalt in warm mix pavement will not experience the typical oxidation or “aging” that most asphalt goes through during mixing. This could potentially result in reduced stiffness in the binder, and lead to things like early rutting in the pavement. The lower heat also affects how well aggregate will be dried in the mixing process, and may mean that residual moisture will exist in the pavement. In addition, there have been questions about the consolidation of warm-mix pavement post compaction, and how this will affect density. Finally, road builders continue to monitor how well warm mix actually compacts at the temperatures it is meant to be used.

Core samples can tell us how a mix is performing

A number of states have been extremely proactive in trying to get a jump start with warm mix. Though it’s too early to conduct any full lifecycle evaluations, agencies have been able to discover a significant amount about warm mix behavior, and gain confidence moving forward. States including Alabama, California, Missouri, Nebraska, Ohio, and Virginia have constructed warm mix test strips and have followed up with investigations of pavement quality. These tests typically compare different methods of producing warm mix, and use a variety of means to predict its ultimate performance.

Probably the most common method to test a new pavement technology is to simply construct a test-section on road that needs repair. This has been a common approach to warm mix pilot applications. These roads can either be inspected in place to observe distresses, or can have cores removed for laboratory analysis. An extensive 2-year comparison of WMA techniques and an HMA control in Virginia showed that WMA strips were performing comparably to HMA, and that certain warm mix technologies might be slowing the detrimental aging process of the asphalt binder. A combination laboratory and field study in Nebraska showed that WMA pavements were rutting at the same rate as hot mix, and predicted from lab data that there would be no expected failures during a 20-year service life. Similar tests are being conducted across the country to further increase our understanding of this material.

Some states, like California and Ohio, have used a technique known as accelerated loading to investigate warm mix. This means that rather than constructing a test section on an actual highway, pavement is constructed in an environment where it can be subjected to exceptionally high loads, simulating years of service in a short time. Experience with California’s heavy vehicle simulator (HVS) showed some increased moisture content and increased initial rutting of warm mix compared to HMA. However, the moisture content was still within reasonable limits, and the rutting behavior evened out over the long term. In Ohio, warm mix showed a higher tendency to consolidate under heavy loads, but this had a relatively small effect on total consolidation. In both cases, warm mix pavements were of similar quality to control hot mix sections.

Europe is home to the oldest warm mix pavements

Despite the current excitement in the U.S. over warm mix, the oldest warm mix pavements can be found in Europe where the technology was first used. Therefore, studies across the Atlantic have a greater opportunity to study their long-term performance. Of these nations, Germany and Norway are home to some of the world’s oldest warm mix asphalt pavements, some of which are a decade old. In Germany, seven test sections with WMA are currently being monitored that were constructed between 1998 and 2001. The result? These pavements are performing just as well as HMA is expected to. The picture is a little more complicated in Norway, where the prevalence of studded tires leads to a wealth of rutting problems. So far however, there is no indication that this is affecting warm mix pavements more than their hot mix counterparts.

So what’s to make of all of this? Well, in summary, warm mix asphalt pavements appear to be performing a lot like what we expect of hot mix asphalt pavements. Of course, we will have a much clearer picture in a few decades, but at least we can breathe a sigh of relief right now knowing that this stuff really does work. After promising initial findings, states are moving forward with their exploratory programs to hammer out the details of mix designs, how recycled materials can be incorporated into warm mix, what technologies work the best, and other design specifics. Warm mix asphalt looks to have a bright future, and that’s good news for our planet, our pocketbooks, and our pavements.