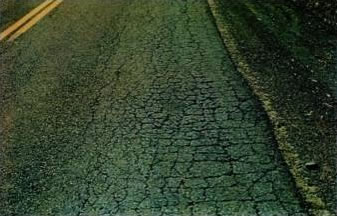 The crack problem is everywhere.   It’s found on our city streets, our nation’s interstates, rural highways, and yes, even suburban roads are susceptible to this problem. In this edition of the RoadReady newsletter, we will take a look at four common kinds of pavement cracking, their causes, and how to repair them.

Four common types of cracks and what causes them

Some common asphalt pavement surface distresses are transverse cracking, longitudinal cracking, alligator cracking, and reflective cracking. Crack repair is important to help preserve the pavement we have and rehabilitate future pavement structures. We’ll take a look at each one in greater detail, and then talk about how to fix them.

Longitudinal cracking
Longitudinal cracks occur in the direction of travel. This type of cracking can be an indicator of either structural failure or possible future alligator cracking, and allow moisture to infiltrate the pavement structure, causing additional future deterioration. Longitudinal cracks may occur anywhere, as they are more construction-related than climate- or subgrade-related.

Longitudinal cracks are likely caused by poor joint location or inadequate construction as seen above. We spent several newsletters discussing how best to construct a longitudinal joint as compaction around a joint can be difficult to achieve to a satisfactory level.  In addition, joints should be planned outside the wheelpath as much as possible as direct loading from wheels will cause the accelerated joint failures.

Transverse cracks appear very similarly to longitudinal cracks. Unlike longitudinal cracks, transverse cracks are those that are perpendicular to the direction of travel, and are usually associated with thermal cracking.  This means that the asphalt surface has shrunk faster than the interior of the pavement due to a temperature difference between the layers of pavement, This primarily occurs in colder climate states. Also, transverse cracks can sometimes be a type of reflective cracking (see the section on reflective cracking, below). In general, transverse  cracks roughen the pavement and allow moisture to penetrate the subgrade, which will cause the pavement to deteriorate towards premature failure.

Alligator cracking, also called fatigue cracking, gets  its name from the texture of the many small cracks, approximately at right angles to each other, which resemble the scales on the back of an alligator.  While the road may not literally bite you, it still can have a significant effect on the traveling public and safety.

Fatigue cracking occurs through failure of the pavement surface under repeated traffic loading and localized tensile stress from heavy loads. These tensile stresses are caused by inadequate support, such as stripping in the bottom portion of the asphalt layer, or loss of subgrade or base support, as from poor drainage.  Other common causes are heavier loads, such as a new bus route over an older street, an inadequate structural design, or simply poor compaction in the asphalt layer during construction.

In order to determine the cause of the fatigue cracks, dig a pit or core the pavement to determine if moisture is causing the deterioration.  This can be identified by visible moisture, such as water bleeding, finding a high water table, or observing moisture from spring thaw or poor drainage. It is important to note that crack sealing is generally no longer effective once the alligator scale cracking pattern forms.

Cracks that propagate in a flexible overlay over an existing crack are called reflective cracks – essentially they reflect what’s happening underneath them. This is an occasion where we don’t like what we see in the mirror.  Reflective cracks can occur over Portland cement or asphalt pavements, as well as other base materials such as stabilized base. These cracks roughen the pavement and like their brethren described above allow moisture to penetrate, which will deteriorate the pavement in the long term.

Repair – How to uncrack a crack

Transverse, longitudinal, reflective, alligator – all of them can be patched, sealed, or removed and replaced. Some methods are better for each type, as we will explore in the subsequent sections.

For low severity cracks (those that are less than 1/2 inch wide and infrequent), crack seal to prevent the entry of moisture into the subgrade through the cracks and further raveling of the crack edges. Hot mix asphalt can provide years of satisfactory service after developing small cracks if the cracks are kept sealed.

For high severity cracks (those that are greater than 1/2 inch wide and numerous), remove and replace the cracked pavement layer with an overlay.

Repair for alligator cracks generally falls into one of two categories:

Small, localized fatigue cracking is indicative of a loss of subgrade support. Remove the cracked pavement area then dig out and replace the area of poor subgrade and improve the drainage of that area if necessary. Then patch over the repaired subgrade.

Large fatigue cracked areas are indicative of general structural failure. To repair, place an HMA overlay over the entire pavement surface. This overlay must be strong enough structurally to carry the anticipated loading because the underlying fatigue cracked pavement most likely contributes little or no strength.

The cure for the crack problem – prevention

While it is evident that cracking is a problem none of us can completely escape, proper education leading to sound design and construction best practices will prevent premature cracking and will result in long-lasting pavements without the need for  intervention.