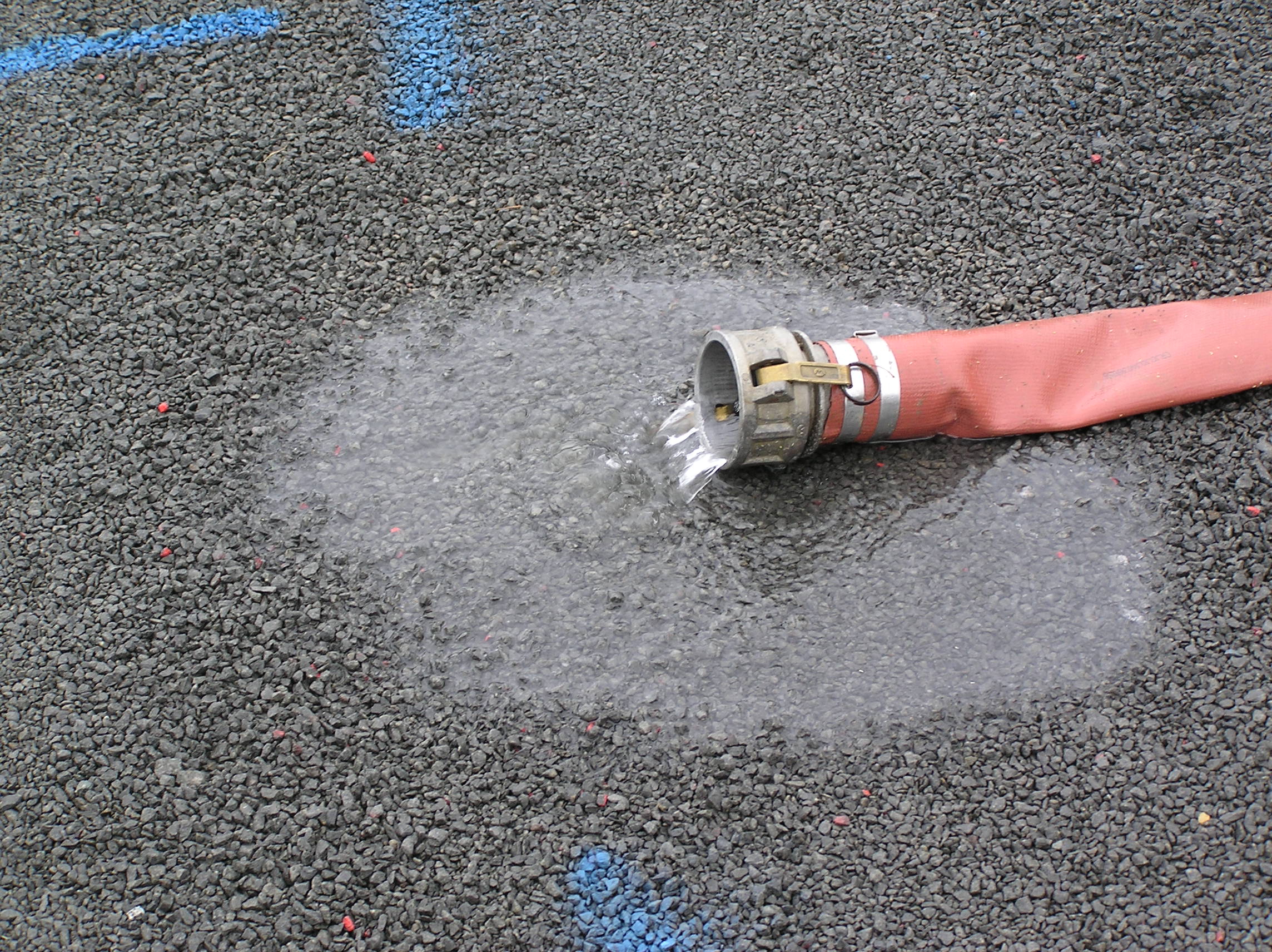 If you have a roof over your head, you’re probably counting on it to keep out the water if it rains. Then when the water runs off the roof, you end up needing gutters and drains so it doesn’t wash everything away around you. Most pavements deal with water this way; they keep it out of the pavement structure so it runs off the surface. But another option is to build the pavement so it’s permeable and lets the water in, and this approach can be helpful in specific scenarios. In this edition of the RoadReady newsletter, we’ll cover the fundamental considerations involved in permeable pavements.

Using the building analogy again, there are actually super-green buildings designed for environmental sustainability that try to collect rainfall and use it to supply building water needs. In the context of pavements, doing something similar doesn’t pose quite as big a challenge, but many of the reasons to consider letting water in instead of keeping it out also have to do with the environment. In particular, permeable pavements can help reduce stormwater runoff and its associated impacts. Possible benefits include addressing regulations designed to prevent pollution of stormwater runoff, dealing with drainage challenges, and limiting impervious surfaces overall, especially for urban and suburban areas.

Function and Use of Permeable Pavements

Pavements of this type are known by several different names, including porous pavements, permeable pavements, and pervious pavements. The adjectives used to describe these pavements may vary, but they all mean the same thing. Fundamentally, they all involve a mix design in which the aggregate is selected to produce a network of air voids in the pavement. The voids allow water that collects on the pavement to drain down through the structure, instead of being channeled away to become runoff.

Permeable pavement surfaces can be built using both asphalt and Portland Cement Concrete (PCC). Either way, the aggregates are coated with asphalt or concrete paste to create a porous structure that water can pass through. Permeable pavements are most often used for parking lots, sidewalks, and trails, and some localities specifically encourage them for these uses. They can also be used for residential streets, and have been used experimentally on some higher-volume roadways. However, they work best on relatively flat surfaces, as roads with sloped sections, or that involve cuts and fills, may create engineering challenges.

The base for a permeable pavement structure commonly consists of clean, washed large aggregate. The aggregate is typically open-graded or even uniformly graded, meaning that the aggregate particles are from a narrow range of sizes or all effectively the same size, and fine aggregate particles have been removed. The base is sometimes referred to as a stone recharge bed. This term refers to one aspect of permeable pavements as a stormwater treatment, because the drainage serves to recharge groundwater levels as rainfall passes through the pavement structure down to the water table.

The thickness and design of base and subgrade layers should be planned to accommodate potential water volumes. For example, a conservative design might call for the ability to handle 24 hours of rainfall from a 20-year storm event. In addition, you would want the structure to be able to fully drain within a reasonable period, such as 72 hours, so it would be available for the next storm. If the rate of infiltration to groundwater is not fast enough, additional drainage features may need to be included, such as perforated pipes to carry overflow.

In contrast with conventional pavements, the subgrade generally should not be compacted during permeable pavement construction. As a result, equipment for excavation and construction should be chosen carefully. Tracked equipment and backhoes that can spread their weight over a larger area are preferred over wheeled and pneumatic tire equipment that will cause compaction.

In addition, because the drainage design depends on maintaining a network of air voids, the base needs to be protected from contamination with dirt and fine aggregate particles. One option is to temporarily cover a permeable base with geotextile fabric, then remove the fabric prior to placement of the surface layer. This can allow construction traffic to operate normally while protecting the base from getting clogged with dust and fill.

Even though they have a different way of going about it, for certain applications permeable pavements can be a good option to handle the challenge of water on the pavement surface. They directly send water to its final destination, rather than detouring it off to the side. Given the potential environmental benefits, permeable pavements are a good tool to have around in the right situation.