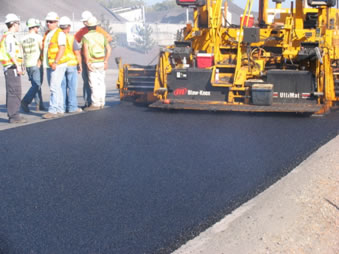 Open graded friction courses (OGFCs) are a type of pavement that have been built across the United States since the 1950’s. These asphalt mixes contain only a small portion of fine aggregate, creating a pavement with a relatively large percentage of air voids. They are primarily composed of single size coarse aggregate, and generally have a high asphalt content. In this newsletter we will explore the benefits of OGFCs, the experience of different agencies, and considerations for their use.

This aggregate structure provides a higher degree of friction as well as permeability to the surface of the pavement. This permeability further improves frictional behavior during wet weather while reducing the dangers of splash and spray and hydroplaning due to increased drainage from the pavement surface. In addition, open graded friction courses are generally quieter than typical pavements. There has been a wide range of experience with OGFC’s in different regions. While a large majority of states have experimented with these pavements, there is a large split over whether they will continue to be built.

One important variable that has shaped agency opinion on OGFC’s is the service life that they have provided. A pavement’s longevity, or service life, is a crucial characteristic that affects whether a given technology is economically viable. Of course, ultimate performance is related to a number of factors such as quality of construction, mix design, and the regional climate. Different states have reported average pavement longevities as short as 6 years, while others have reported more than 12 years of service life before needing any maintenance. This represents huge variability, and spans the gap between a viable paving option and one that isn’t practical. However, this variability can be controlled. OGFCs will exhibit a satisfactory service life as long as care is taken with the mix design and it is used in the proper conditions.  In the following sections, we will explain when OGFCs should and should not be used.

OGFCs are the most appropriate when their unique benefits are tailored to a specific project. This is the case in areas with:

Warm southern climates have had some of the best results with OGFCs, as they help mitigate the heavy rainfall in these areas without being negatively affected by snow and ice, which will be explained in the next section. OGFCs should be used when one or more of the above benefits represent a project priority, but where adverse conditions that will threaten their success are not present.

OGFCs can reduce surface water runoff and improve its quality

The aggregate structure of open graded friction courses makes them particularly susceptible from raveling. To avoid accelerated raveling, their use should be avoided in areas where snow and ice occur. Chains, studded tires, and snowplows are all known to aggravate raveling in OGFCs. In addition, particles on the roadway, particularly snow removal materials such as sand and salt, can clog up the pores in the pavement, limiting their drainage capability. Snowplows have also shown a tendency to deteriorate traffic markings on such pavements. OGFC’s also do not perform well when high stresses are expected from turning.

Many state DOTS have recorded their experiences with OGFCs. The states that have had success use a number of different additives to increase performance.

As with most paving jobs, deficiencies on any existing pavement structure should be corrected. The base layer used for placement should be dense graded to avoid structural failure.

Some specific maintenance guidelines apply to open graded friction courses. Patching must be done with care to prevent disruption of surface permeability, which is essential to the function of OGFC’s. In general the surface treatment required is dependent on the size and severity of the failure. Let’s take a closer look at the most common solution to address each size of failure:

Because of the specific utility of OGFC’s, they are likely to remain a part of our roadway networks. The issues with longevity that have occurred in the past can be managed by using intelligent design practices and only building them in the right scenarios. When implemented correctly, OGFC’s can have meaningful impacts on roadway safety as well as the health of the surrounding environment. As long as transportation departments continue to keep an open mind, open graded friction courses will continue to play a beneficial role in our roadway networks.