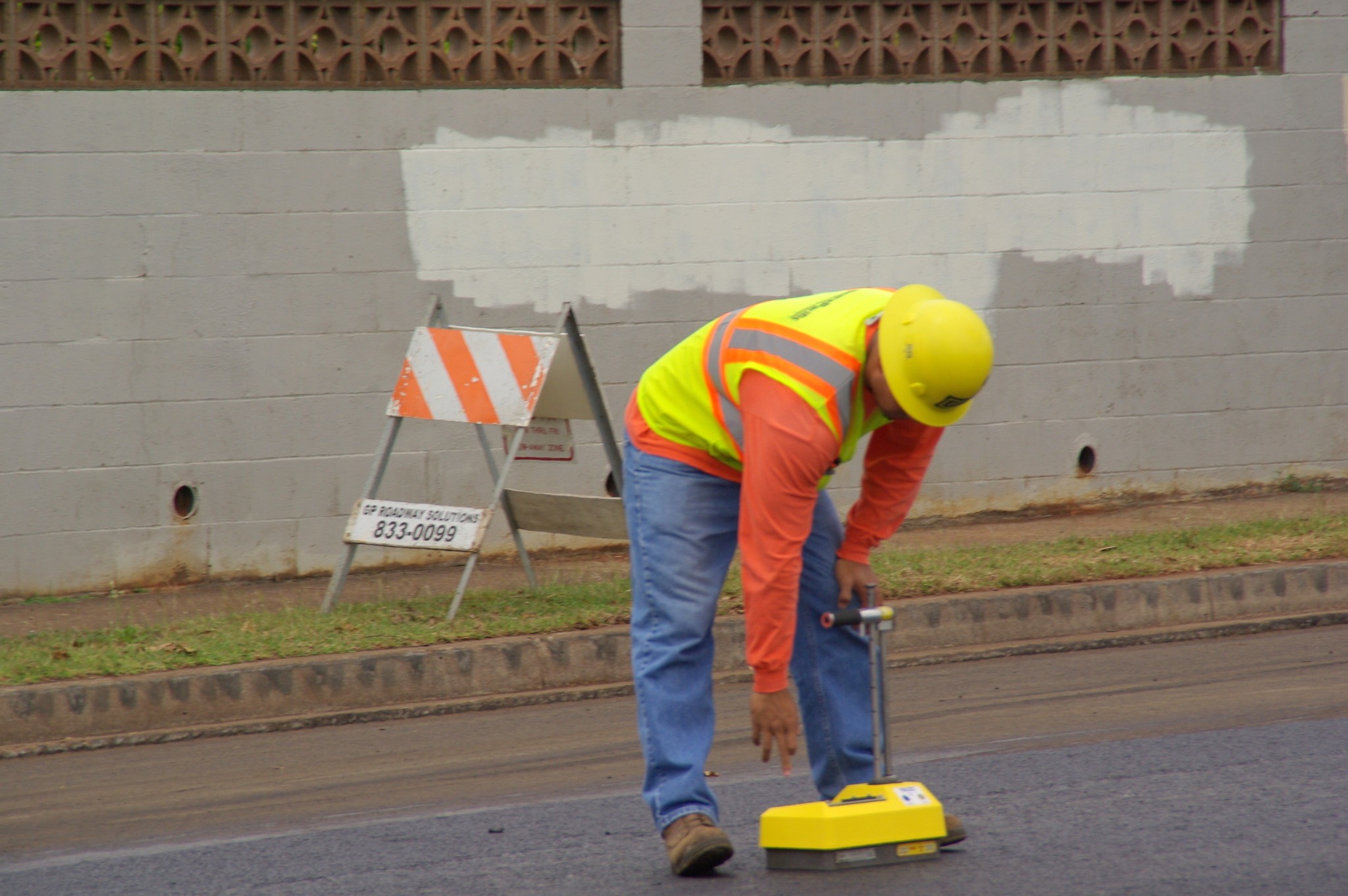 Sometimes you need to take a thing apart to see how it works, but what happens if it’s hard to put back together again afterward?  If you can avoid having to take it apart in the first place, it might save some trouble. Taking field samples and cores from pavements for laboratory testing is sometimes necessary, but still involves removal of material. In this edition of the RoadReady newsletter, we’ll walk through some of the technologies currently used for nondestructive testing of a pavement’s structural properties.

A falling weight deflectometer (FWD) uses a mechanism that drops a weight from a specified height onto a load plate that is in contact with the pavement surface. A system of sensors spaced out along the pavement measures the pavement deflection caused by this load at regular longitudinal intervals. The amount of deflection under the center of the load plate and at increasing distances from it indicates how stiff or elastic the pavement is. FWD testing can be used after a pavement structure is completed to verify whether it meets overall strength requirements.

A seismic pavement analyzer is a device that measures the pavement’s response to vibrations. The device creates the vibrations by striking the pavement with pneumatic hammers of different sizes, which produces vibrations of different frequencies. The vibrations are then picked up and measured by a set of sensors at a fixed distance from the hammers. Based on the intensity of vibration detected at each frequency, the analyzer can determine the thickness and stiffness of the pavement. It can also identify the presence of cracks or delaminations beginning to form that are precursors to more severe pavement distress.

The dynamic cone penetrometer (DCP) is a device in which a hardened cone tip is placed on the surface and then a weight is repeatedly dropped on it from a specified height. After a set number of blows, such as every five blows, the penetration of the cone into the surface is measured. The DCP is used primarily on unbound materials such as base or subgrade soil, or weakly stabilized materials. It is considered non destructive because the test does not affect the ability of the material to support the pavement structure. The DCP test indicates the shear strength of the material based on the measurement of the rate of penetration.

Ground penetrating radar (GPR) is a technology that involves transmitting radar pulses into the pavement which are reflected back to an antenna. Based on the composition of the structure below the surface, the energy in the pulses will create variations in the signal captured by the antenna. GPR can be used to estimate thicknesses of individual pavement layers as well as the air void content of the pavement.

Nuclear density gauges are able to measure the density of an in-place asphalt pavement with little or no disruption of the mat surface. The gauge operates using a small source of gamma radiation placed on the end of a retractable rod that is lowered to the pavement surface. This rod can be used in two modes, a direct mode where it penetrates the mat slightly, or a fully nondestructive mode where it remains entirely within the gauge.

As the source emits radiation, the gamma rays interact with electrons in the asphalt mix and are scattered in various directions. Some of them bounce back and reach a detector housed in the gauge. The number of rays detected by the gauge is proportional to pavement density and can be calibrated to actual densities based on pavement cores tested in the laboratory.

Non-nuclear gauges have been developed as an alternative to nuclear density gauges because they do not contain radioactive material or require the same safety controls. The most common type are electrical gauges that send a small amount of current through the pavement to create an electrical field. The gauges determine pavement density by measuring the response to this field. When they were originally developed, non-nuclear gauges generally were not as consistently accurate as nuclear density gauges, but more recent devices have improved significantly.