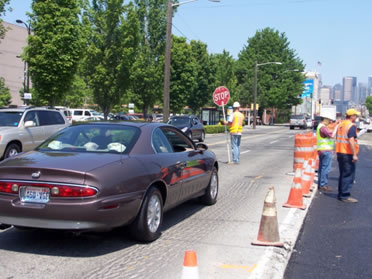 When it comes to roadway planning and project design selection, there is never a single option for a given project. Transportation agencies are commonly tasked with selecting the best design from a group of alternatives. In any decision making process, cost is a critical factor as government agencies are tightening down on budgets, and are expected to do more with less. However, when it comes to roads and highways, cost is a complicated issue. In addition to the up-front cost of a project, planners have to consider how long the roadway will last and what kinds of maintenance and rehabilitation will be required. Furthermore, costs to the driving public can be factored in as well. To make informed decisions, these different aspects of cost must be combined into a single figure that can be directly and fairly compared. A common tool used for such situations is the Life-Cycle Cost Analysis (LCCA).

What is a Life-Cycle Cost Analysis?

A life-cycle cost analysis is an approach to economic analysis that attempts to take all of the costs associated with a given project and convert them into a single value. This allows for comparison of different project alternatives that will provide similar utility. Because of the impacts that interest rates and inflation have on money over time, adjustments must be made to compare costs at different stages in the project’s life. For instance, money spent on the initial construction of the project must be weighted more heavily than any final disposal costs associated with the project. This can be explained by the fact that present dollars can be invested to produce more money later, or that future money will be worth less than it is today due to the effects of inflation.

Conducting an LCCA also requires selection of an analysis period, chosen based on the alternatives being considered. This period could represent the service life of a road, or could encompass several cycles of removal and rehabilitation. The FHWA recommends that an analysis period includes at least one instance of rehabilitation, and that a minimum of 35 years be used for pavement projects. The duration must be the same for each alternative you are comparing. However, this period may include a different number of rehabilitation cycles for each alternative. Once all the costs of a project have been put in the context of a single time period, the different alternatives can be compared directly. Typically, costs are put in terms of today’s dollars, known as net present value or NPV.

LCCAs can include user costs, such as traffic delays

The goal of an LCCA is to comprehensively include all project costs from cradle to grave. This includes agency costs such as engineering fees, contracting, construction, maintenance, rehabilitation, administration, and salvage and waste disposal. However, because many roadway agencies are government bodies that seek to maximize public utility, user costs can also be considered. These are typically much higher than agency costs and include components such as user travel time and delay, vehicle wear, fuel, and crashes. Because the decision is made by a public agency, user dollars can be equated to the tax-derived budget of the owner when deciding the best option. For example, wages lost by users sitting in traffic are weighted the same as dollars spent on construction.

Planners must have a good idea of how long a roadway design will last to produce an accurate LCCA. This first requires an estimate of the traffic loads, particularly for heavy trucks and buses, that a given route will experience. Different kinds of vehicles are assigned a number of Equivalent Single Axel Loads (ESALs), a metric based on weight and number of axels that allows direct comparison of the roadway damage caused by a vehicle. In this way, the traffic data for a given roadway can be converted into a measure of the loads and stresses it will experience over time. The rate of ESALs is used to determine the rate at which the roadway will degrade. Roadway quality is measured using another metric known as the Present Serviceability Index, or PSI. Agencies establish cut-offs for PSI that dictate when rehabilitation actions need to occur. In this way, a timeline of construction activity can be predicted. This allows informed decisions regarding selection of the analysis period as well as cost calculation.

The analysis period should span initial construction as well as rehabilitation

Different agencies use a number of different methods for performing LCCA’s. Software use is common, and agencies can use packages developed in house, by a private organization, or by another body such as the FHWA. The FHWA provides a free Microsoft Excel-based highway LCCA tool known as RealCost. Departments of Transportation such as Colorado and Georgia have modified this tool to fit their specific needs.

LCCA’s can be performed in one of two ways:

The complexity of cost considerations in transportation construction require sophisticated tools to make decisions. It is important to consider a wide range of costs to both the owning agency as well as the driving public, and how these will accrue from project construction to disposal. The effectiveness of the LCCA in accounting for all these aspects of choice has made it the technique of choice for cradle to grave economic analysis.