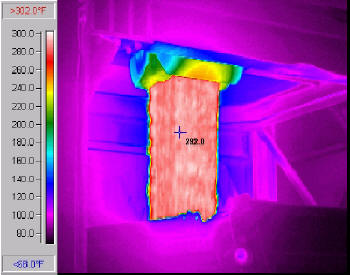 What are HMA Temperature Differentials?

Take a look at the pavement in the picture below. There are spots that aren’t in great shape, but, most of the mat is just fine with these distress spots showing up only every couple of hundred feet or so. 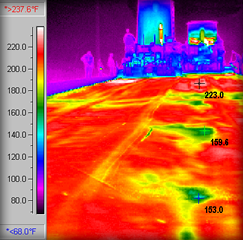 Why do they happen?

Prior to the mid-1990s it was thought that the paver sufficiently blended this crust into the rest of the HMA. However, observations with infrared temperature sensors and thermal imaging cameras show this is not the case.  The cold HMA passes through the paver relatively intact and is placed in concentrated areas of the mat and regular intervals corresponding to each truck load (see images below). 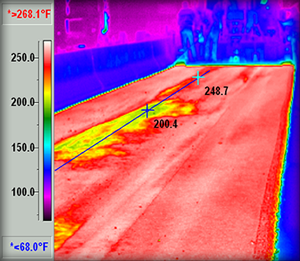 These cold locations on the mat generally resist adequate compaction resulting in concentrated areas of higher air voids and open surface texture that are more susceptible to deterioration by traffic and the environment. While this can look like aggregate segregation to the naked eye, test results on such areas show that segregation is often not present at all.

The bottom line is that these cold spots can ultimately result in spots of poor density that will ravel and crack prematurely when compared to the rest of the mat. While they can be combated for a time with patching, the final remedy is an earlier-than-anticipated resurfacing; on the order of 20-80% earlier depending upon severity. What’s worse, since the spots are relatively small, most random sampling QA/QC plans will not catch this defect.

There are three primary ways to minimize your job’s exposure to HMA temperature differentials: 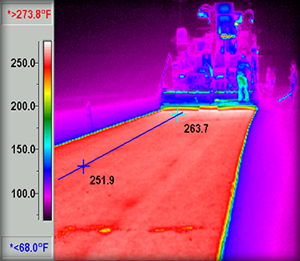 How to Spot a Potential Problem

Often, a hand-held infrared thermometer can be used to check for cold spots in the mat behind the paver. A good rule-of-thumb is that a spot 25°F colder than the surrounding mat may be a problem. If such a spot is located, it may be wise to check that spot for proper compaction later on.

If a temperature gun is not for you, there are other ways ranging from a hand-held thermal imaging camera to a thermal imaging bar that can be placed on the screed that is capable of imaging the whole mat in real time.

We hope now that you know a little more about HMA temperature differentials, you realize that while they lead to potential problems in quality of the pavement they are a manageable issue. Proper awareness and quality control help reduce their occurrence and overall impact on a pavements performance. Managing temperature differentials reduces maintenance needed, leading to a decreased overall life-cycle cost of a pavement, which is something we think that everyone can get behind.

We currently offer two web-based courses addressing some of the issues discussed above.  Components of Compaction and End Dump Truck Exchange and Transport.The advice, tips and best practices presented in this article came from WSDOT from their extensive research on temperature differentials. If you want to read more, check out their research report .